'I am not who you think I am,' says Farah after deciding to face his true story 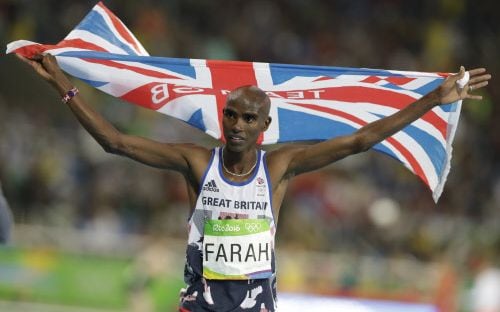 Pari:Mo Farah enjoyed a remarkable career on the track becoming the first British athlete to win four Olympic gold medals, but his road to glory was, in reality, a much grimmer version of Chariots of Fire.

"The truth is I'm not who you think I am," the 39-year-old Somalia-born great told the BBC in a revelatory documentary, broadcast this week, about his life.

The six-time world outdoor champion said even the name that appears in the record books is wrong. He is Hussein Abdi Kahin.

Farah decided to discard the fantasy life story he had created after he was reunited with his mother Aisha in Somaliland during the making of the documentary.

"It's important that you tell your story. Lying is a sin," she said.

He was not the 'mummy's boy' he had declared himself when he described being brought up by Aisha in Brighton.

Nor had Aisha divorced his IT consultant father Muktar shortly after Farah, aged eight, and two brothers arrived with her in England.

Neither parent made it to England. His father was killed during civil unrest in Somalia when the future athlete was four.

Aisha and two of his brothers still live in Somaliland, which declared independence from Somalia but is not recognised internationally.

"Somalia was different. We never had our father. That's the main reason we came to London, for our family to be as one.

"I was always a happy kid, up for laughs, joking around."

"For years I just kept blocking it out," Farah told the BBC.

"But you can only block it out for so long."

Aisha told him she had sent him away to Djibouti because they were living in a war zone.

He was then illegally trafficked at eight or nine to England under the borrowed name Mohammed Farah to work as a servant for a family.

Farah said he had to do housework and childcare "if I wanted food in my mouth", and was told: "If you ever want to see your family again, don't say anything."

"I would just lock myself in the bathroom and cry," he says.

He was rescued by Kinsi Farah, a woman he formerly described as his aunt but, he now says, is the sister of a man who allegedly aided in bringing him to England.

His love of running blossomed under the guidance of physical education teacher Alan Watkinson.

"The only language he seemed to understand was the language of PE and sport," Watkinson told the BBC.

"The only thing I could do to get away from this (situation) was to get out and run," he said.

He ran all the way to double Olympic gold at 5000 and 10000 metres in 2012 and 2016 but also into controversy because he worked with coach Alberto Salazar, who was then banned for doping violations.

Farah said he never suspected the coach of using illegal methods. Farah left Salazar's Oregon Project in 2017 -- the year he was knighted by the Queen.

He says he suffered for his loyalty.

"I don't want to go into any more detail but there's been a lot of stuff, financially and emotionally, where I have suffered a lot," he told The Times in 2020.

Farah has established a happy family life with wife Tania and their four children -- including twin girls Aisha and Amani.

During the documentary, Kinsi set up a video call with the real Mohamed Farah.

"I carry your name and for many, many years, I carry that with me and I'm proud you know what I have achieved," the star said.

"But as a person I always wonder: where's Mohamed? Is he okay? What would life have been like for him?" AFP