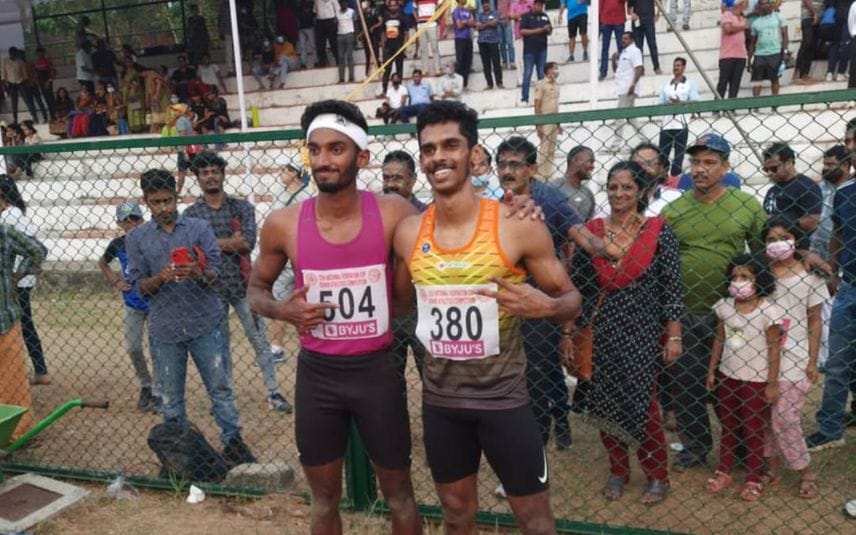 On a day that saw nine jumps over 8m at the C H Muhammed Koya Stadium, Aldrin produced a fine series that saw all five of his valid efforts past that mark while Sreeshankar sailed over that distance on each of his three valid tries, including an 8.36m that helped him improve his own National Record by 10cm and a place among the 10 best Asians ever in Long Jump.

Less than a month ago, the 20-year-old, who hails from Tiruchirapalli, broke into the select band of Indians in the 8m club when he won the Indian Grand Prix 2 in Thiruvananthapuram with 8.20m.

In a gripping contest, Sreeshankar opened with 8.16m and Aldrin responded with 8.01. The younger jumper leaped 8.37m but a tailwind of 4.1m/s denied him the National and meet records. A fired-up Sreeshankar could not stop Aldrin from winning gold but came up with 8.36m on his third attempt to improve his own National and meet marks.

The exciting battle at the long jump pit helped Aldrin and Sreeshankar steal the thunder from Maharahstra's Aishwarya Kailash Mishra who had brought everyone to the edge of their seats with a sensational 400m sprint in 51.18 seconds, the fifth-best time by an Indian woman and a meet record.

Scorching the track from the start, she appeared to run a race of her own. It became apparent by the halfway stage that she would win by a big margin, leaving the others to battle for the second spot. Only Hima Das, three times in 2018, and Manjeet Kaur, once in 2004, have run quicker than Aishwarya Mishra.

These two performances meant that B Siva Kumar (Tamil Nadu) and Dutee Chand (Odisha), who claimed the titles of the fastest man and woman respectively, had to settle for less of the limelight on Sunday.

The 27-year-old Siva Kumar, who clocked a personal best time of 10.37 seconds, was identified as the winner only after the photo finish equipment gave him an edge of four-thousandths of a second over Tamil Nadu team-mate Elakkiadasan.

Sourabh Rathi, a 21-year-old from Uttar Pradesh, marked his debut in the senior ranks with gold in the decathlon. With a determined effort in the 1500m, the final of the 10 events, he leapfrogged past the leaders Boota Singh and Mohit. Boota Singh looked set to pick a fourth National-level crown but a slow 1500m meant he finished 24 points behind Sourabh Rathi.

There were good victories for Ajay Kumar Saroj (Uttar Pradesh) and Lili Das (West Bengal) in the men's and women's 1500m races, both having to showcase their ability to produce a kick to outsprint Rahul (Delhi) and Ankita Dhyani (Uttarakhand) respectively.