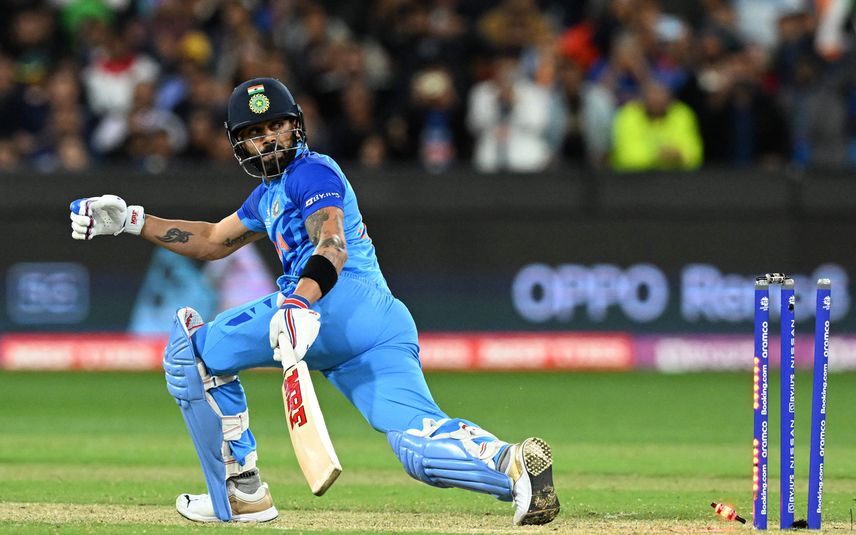 Adelaide: After India's humiliating loss to England by ten wickets in the second semifinal of the ongoing ICC T20 World Cup, the wait for the ultimate prize in the shortest format continues for Virat Kohli, the Men in Blue's greatest warrior in the history of this competition.

Following his triumphant return to the sport after battling inconsistent form with the bat and his well-documented struggles mentally, the stage looked set for Virat Kohli's redemption. After ending up as second-highest run-scorer during Asia Cup 2022 during which he hit his much-anticipated 71st international ton after a gap of over 1,000 days, the T20 World Cup trophy was Virat's next mission. On top of that, the tournament was being held in Australia, a country in which the batter has scored heaps of runs effortlessly.

Virat started the tournament with a bang, scoring a memorable 82* against Pakistan at Melbourne, helping Team India achieve the 160-run target despite being four down for 31 in around six overs.

This knock set the tone for the rest of the tournament for this star batter, as he continued his fine form with half-centuries against Netherlands and Bangladesh in the group stage.

Then arrived the semifinal against England at the Adelaide Oval, which statistically is Virat's happy hunting ground. Here, Virat has 957 runs in 11 matches across 15 innings at an average of 73.61. He has scored five centuries and four 50s at the venue, with the best score of 141.

In the match, he scored yet another half-century for his country and ended with a score of 50 off 40 balls. This time, he had able support from all-rounder Hardik Pandya, who scored a valuable 63 off just 33 balls. Team India scored 168/6 in 20 overs.

But Virat's efforts did not get much reciprocation from the rest of the team. If openers KL Rahul and Rohit Sharma failing to fire with attacking intent was not enough, the bowling attack let the Men in Blue down. The target of 169 was chased down with skipper Jos Buttler (80*) and Alex Hales (86*) standing tall without losing their wicket.

India had lost the semifinal by 10 wickets and once again, Virat's efforts and gigantic statistics went in vain. With the final winning shot by England, what could have been the story of Virat's redemption arc ended on a bad note.

With this loss, continued an unfortunate pattern of Virat firing on all the cylinders but not getting much support from the rest of the team.

In the 2014 T20 WC, it was Virat who scored 77 off 58 balls in final against Sri Lanka. But he failed to get much support from rest of the batters. Yuvraj Singh, one of India's most successful all-rounders, played a sloppy knock of 11 in 21 balls, which left India with only 130/4 on the board, which the Lankan Lions chased down easily.

In both the tournaments, Kohli earned the 'Man of the Tournament' awards for scoring 319 runs and 295 runs respectively, but he did not get the chance to lift the silverware that he and his team aspired for.

The story is same this time around. Virat could still have his name at the top of the batting charts when final between England and Pakistan is done, but the silverware still misses from his resume that has a 50-over World Cup, a Champions Trophy and hundreds of batting records.

The age is also not at his side. At 34, it is not clear if he will feature in the 2024 T20 WC, when he will be 35-36 years of age, most likely still playing in a hectic schedule across all formats of the sport. But the fans of the sport and Virat can only hope that the leading run scorer in T20 World Cup history (1,141 runs at an average of 81.50 with 14 half-centuries) gets the well-deserved trophy to his name after a tournament worth of quality all-round performances by Men in Blue two years later. (ANI)