ICC bowled over by Virat Kohli's incredible batting, tweets 'The King is back' 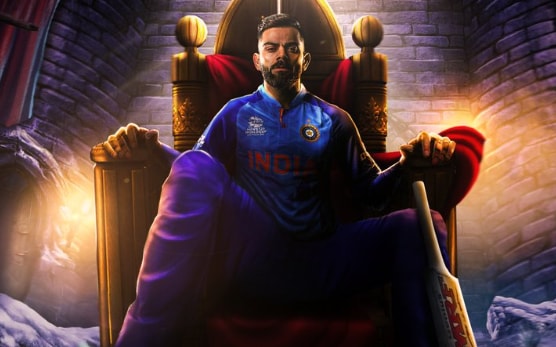 One of the best batters in the contemporary era, Virat Kohli hit an unbeaten 82 as India pulled off a miracle four-wicket nail-biting win over Pakistan in a final over at the ICC Men's T20 World Cup in Melbourne on Sunday.

After Virat Kohli's epic 82 not out in 53 balls, the official Twitter handle of the International Cricket Council (ICC) shared a graphic showing Kohli sitting on a throne.

"The King is back...Take a bow, Virat Kohli," the ICC wrote.

Kohli came to the crease in the second over after opener K.L Rahul (4) was undone by Naseem Shah and things looked tense for India when a fired-up Haris Rauf removed Rohit Sharma and Suryakumar Yadav. India were tottering 31/3 after the end of Power-play.

But Kohli kept his nerve and, just like he has done so many times previously, expertly guided India home in front of a crowd in excess of 90,000 at the MCG in Melbourne.

India never looked like winning it, but with Kohli and Hardik Pandya at the crease, there was always an outside chance they could pull a rabbit out of the hat. Kohli and Pandya (40) shared a match-winning stand of 113 off 77 deliveries, lifting India from 31/4 to 160/6 on the last ball of the match to get their campaign off to a winning start.

There were 31 needed from the last two overs and Kohli hit Rauf for two massive sixes on the final two deliveries of the penultimate over to make the equation 16 from the final six balls.