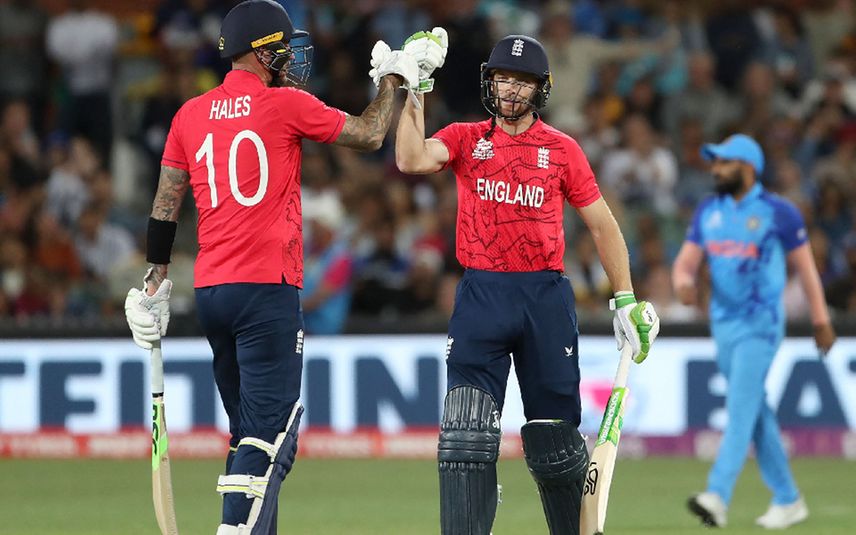 England seemed to have saved their best for the grand stage as they reduced the semifinal to a lop-sided affair, courtesy a splendid bowling effort which they complemented with some breathtaking stroke-making.

It was Hardik Pandya (68 off 33 balls), whose fearless hitting took India to 168 for six but it was just about a par-score at the Adelaide Oval.

England captain Buttler (80 not out) set the tone with three boundaries off Bhuvneshwar Kumar's opening over but it was Hales (86 not out off) who butchered the Indian attack into submission.

The target was achieved in just 16 overs as England batting line-up clicked for the first time in the tourney and what a day it chose to brings its A game to the fore.

The England opening duo gave India's star-studded line-up a lesson in how to build a T20 innings: that there is only one way, the offensive way.

It was one match that was decided in Powerplay as India managed only 38 runs in six overs as the archaic style of safety-first approach hurt them terribly.

In complete contrast, England's top order which looked shaky throughout the league stage, smashed 63 in their six overs. The match was won and lost then and there.

Hales hit as many as seven sixes in his 47-ball knock and his approach showed that there were no demons in the track. He deployed the old-fashioned 'Sanath Jayasuriya school' of hitting in the first six overs.

When Virat Kohli and Rohit Sharma were batting, they were looking to hit through the line unlike Hales and Buttler.

Against lesser opposition like Bangladesh, they could make it up with a total of 168 but it was never enough for a side like England which has reinvented the grammar of T20 batting.

Bhuvneshwar and Arshdeep Singh didn't get enough swing up front and team management's fascination to play Axar Patel (0/30 in 4 overs) and Ravichandran Ashwin (0/27 in 2 overs) ahead of Yuzvendra Chahal backfired badly.

The success England spinner Adil Rashid (1/20 in 4 overs) on the same track added insult to the injury.

By the time, Buttler hit Mohammed Shami (0/39 in 3 overs) down the ground for one of his three sixes, the Adelaide Oval stands wore a desolate half-empty look.

And the over-throws and the dropped catch by Suryakumar Yadav typified a day when everything that could go wrong went wrong for India.

This Indian team never had all its bases covered and paid the price.

But even in this defeat, the T20 captain-in-waiting Pandya revelled in the role of a finisher with a sensational knock that gave India a chance to fight.

Virat Kohli (50 off 40 balls) occasionally displayed his regal array of strokes but it was the flamboyant Baroda man whose unbelievable end-over pyrotechnics took India to a fighting total, which had looked distinctly impossible after the first 10 overs.

In the last four overs, India scored 58 runs, courtesy four fours and five astonishing sixes from Pandya with a drop-dead gorgeous flick behind the square off Chris Jordan (3/43) being the stand out one.

KL Rahul's (5) abject failure against bigger teams looked even more pronounced as Chris Woakes exposed his shortcomings with extra bounce in the second over.

But if India scored at least 20 runs less, blame it on skipper Rohit Sharma (27 off 28 balls) and the first 10 overs that yielded only 62 runs. In a semifinal, consuming 42 dot balls (effectively 7 maiden overs) doesn't paint a pretty picture.

Had it not been for the sixes that Hardik hit off Sam Curran (0/42) and Jordan, India would have ended with a below-par score as Kohli, despite his fourth half-century in the tournament, couldn't up the ante.

There are times it seems that Kohli is on a mission to be better than the best. The six over extra cover off Woakes was simply unbelievable. The head position, the stillness and transfer of weight, everything in sync.

There was a short arm bowler's back-drive over Liam Livingstone's head even as Rohit struggled at the other end.

The back-to-back boundaries off Curran through mid-wicket region and similar shot over extra cover for a one-bounce boundary of Jordan's deliveries were the only three convincing shots from the India skipper.

Not even the slog sweep for four off Rashid looked like he was in control and the final outcome wasn't certainly what people expected in a big-ticket game from Rohit.

Pandya came to India's rescue and changed the complexion of the innings.