This is the national festival of Malayalis. Like other traditional festivals, the aim of this too is the promotion of amity and social cohesion among the people.. 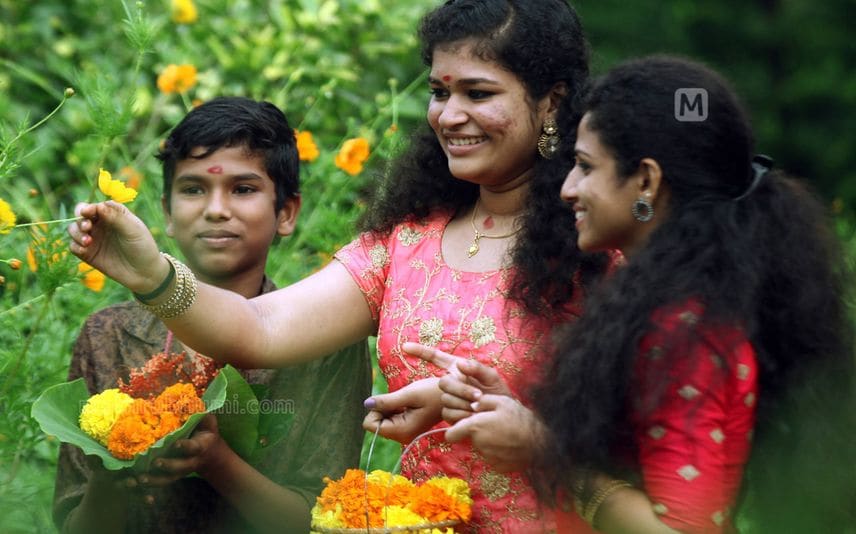 This is the national festival of Malayalis. Like other traditional festivals, the aim of this too is the promotion of amity and social cohesion among the people..

According to the popular myth the Gods became jealous of the goodwill enjoyed by the Asura King Mahabali, the benevolent king of Kerala. So they plotted a way to get rid of him. Lord Vishnu came down in the guise of Vamana, a midget. He took advantage of the king's benevolence and tricked him into leaving his kingdom and kicked Mahabali to the nether world. But as a gesture,Vishnu gave Mahabali permission to visit his kingdom and people once a year. This visit of Mahabali marks Onam, the festival of plenty.

The main feature of the festival is a vociferous welcome to King Mahabali. In millions of households Onam is symbolized by icons. Made of clay or mud, these conical objects are adorned with flowers and worshipped as Thrikkakara Appan, symbolizing the Vamana Avathar of Lord Vishnu, central to the Onam legend.

That Onam is being celebrated in Tirupat also confirms that Onam was popular in the southern region before becoming confined to Kerala after the 10th Century AD. Mangudy Marudanar, one of the noted poets of the Sangam Age, is said to have described the Onam celebrations in the Pandyan capital of Madurai in one of his poems.

Onam is celebrated in the month of Chingam, Malayalam era (late August or early September). It has for the last several centuries become a grand festival in which all sections participate with jubilation. The most striking fact about the festival is that it is celebrated in commemoration of a glorious past when there was an ideal state of prosperity and peace. This aspect has a special significance to the people now when all their dreams are for the realization of such a welfare state.

The festival commences with Atham and lasts for a fortnight culminating on Uthirittathi. The most important celebrations are on four days- Uthradam, Thiruvonam, Avittom and Chathayam.

There will be mirth and jollity, especially among the younger folk during the entire season. The preparations usually begins from the Atham Day when flowers are brought and arranged in various patterns, known as Athappookalam. The climax of the festival is on Thiruvonam Day when every one bathes and offers worship in temples. Then decked in their best dresses they get ready for the grand feast, called 'Onam Sadhya'.

It is a grand feast indeed, even in the poor man's hut. Rice is the main item and along with it several sorts of curries or vegetable preparations including various kinds of puddings. After the feasting, there is sports and games, in which every one participates. For the young, Onam is the time for rejoicing. It is the time for getting together with friends, relatives and grandparents.

With an eye to promote tourism and ensure people's participation, the Government has declared the festival season as a Tourism Week and sponsors it as a state festival. During the Tourism Week, pagentry and performances in the traditional art forms are conducted in a dozen centres in the State Capital to give visitors a taste of Kerala's heritage. Celebrations are also there at other places like Ernakulam, Kozhikode etc. The festival culminates with the Aranmula Snake Boat Race in which men in traditional dresses would race to the accompaniment of choral songs.

LIFESTYLE AND LEISURE/TRAVEL AND COMMUTING

THE FESTIVAL OF ONAM

Women are always obsessed to look the best ...

This year, students welcome Onam with all ...