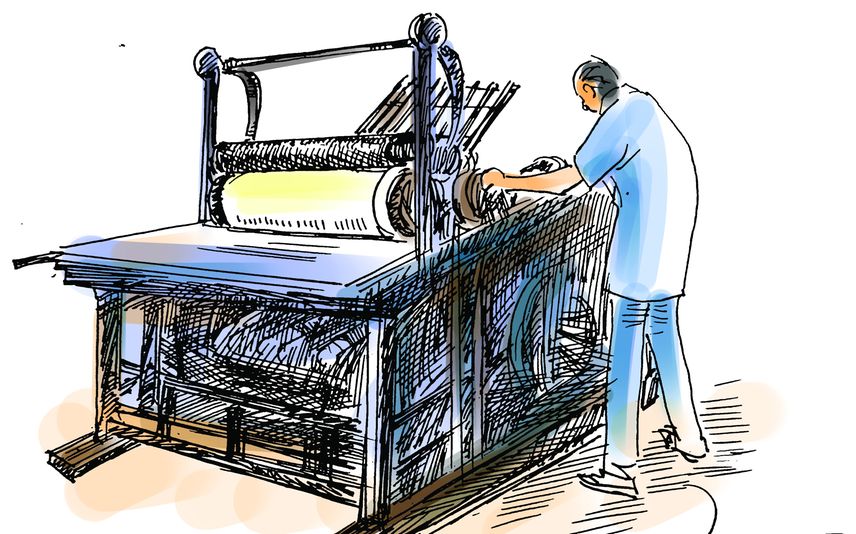 With only seven and a half hours left until dawn, Foreman Chanthukutty handed over the first copy of Mathrubhumi newspaper, printed in an old Cylinder Press, to editor KP Kesava Menon. From that day onwards, the story of Mathrubhumi's survival with its ups and downs began to unfurl in front of Malayalees. Despite being a mouthpiece of the liberation struggle(Vimochana Samaram), the newspaper had its days when it struggled to pay its workers. In another instance, the building, press and machinery for printing fell into the spiral of debt.

Back then, the reams for printing the newspaper were bought on credit from CV Ramakrishna Iyer's shop in Kozhikode. Iyer was a person who had an affection and admiration for Mathrubhumi. At the same time, the stamps were purchased from Railway Mail Services (RMS).

Without electricity, candles and kerosene lamps were the sources of light for all the works done in the press. Kerosene purchased from Pachan's shop later stopped after he fell into debt and had to shut down his business.

In the early years, Mathrubhumi struggled for survival due to their debt. Mathrubhumi owed money to Kurupath Kesavamenon for buying the press and the building from him. At that time, K Madhavan Nair was the only director of the company. Eventually, the board of directors decided to sell the existing property and move into a rented apartment.

However, the building was valued at around Rs 10,000 by Appu Nedunagadi, the founder of Nedungadi bank. Despite the setback, Madhavan Nair borrowed Rs 6,000 from his friends by risking everything he had.

Further, KP Kesava Menon gave Rs 13,000 in cash and Rs 500 in shares. While handing over the money to the manager in presence of his wife and children, Madhavan Nair said: ''The interest on this money should be paid accurately. Otherwise, the education of my children will be stopped.''

P Ramunni Menon was the second editor of Mathrubhumi. After assuming the office, he wrote a letter to the board of directors asking them to reduce the overuse of kerosene and enquire about the steps taken to maintain financial discipline when it was suggested that night work should be reduced. Moreover, he decided to decrease the monthly salary from Rs 85 to Rs 75. Sometimes he paid the employees from his pocket for the work during the night.

When the famine was ravaging across the state in the 1930s, the newspaper price was cut down by half from one 'anna' (1/16th of a rupee). On May 1, 1934, a newspaper published an article informing this.

Similarly, Mathrubhumi was left without any money when the need arose for new printing presses in 1946. Finally, TP Sundarayyar came forward, and he mortgaged all his assets to the bank to buy the press. Earlier, Municipal councillors, including Sundarayya, resigned after a controversy erupted over the supply of electricity to Kozhikode. At that time, Mathrubhumi was against the resignation of its members and harshly criticized the decision to resign. However, when the situation arose, Sundarayya came forward to help Mathrubhumi.