The historian, former editor and heir to Mahatmaji-Rajagopalchari lineage traces the arc of Mathrubhumi’s history, whose brightest chapter was the epochal temple entry agitations spearheaded by its founders, which forever changed India’s thinking on the social sickness of untouchability 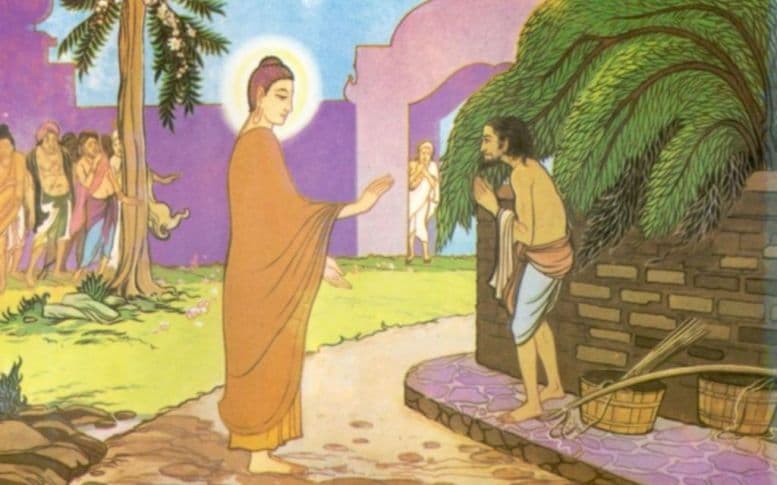 Buddha accepting a request for ordination from the Untouchable, Sunita. Photo: Buddhism in Pictures, The Buddhist Information Center, Sri Lanka

Mathrubhumi’s centenary is a milestone where the modern traveller who pauses to ask questions can find extraordinary answers. He learns that the courageous Malayalis who founded Mathrubhumi one hundred years ago thought that climbing one steep mountain would not be satisfying enough. They wished to climb at least three. They wanted India’s independence from the British. They wanted social equality among Kerala’s separated and graded castes and outcastes. And they wanted to keep different religious communities on a common platform.

Each goal was crazy, and the founders made their project crazier still by telling themselves that they would take a difficult route to reach the summit - the route of logic (pointing out that humanity was one), of personal example, and of risk. They would risk imprisonment. They would risk opprobrium. “The British will call us disloyal. So will our own traditionalists. Let them. Liberty and equality demand an uphill climb.”

History has recorded that for the historic Vaikom Satyagraha {1924-25} the initiative was taken by the Mathrubhumi founders and their reform-driven associates. Gandhi responded, and India’ social and political future changed. History has also recorded that Vaikom’s biggest achievement was not that one hoary temple reluctantly opened some of its doors to long-excluded human beings. Vaikom’s amazing achievement was that Malayalis everywhere, and Indians everywhere, realized that untouchability was a sickness that Indian society had to face and overcome.

The impact was far-reaching. India’s thinking took a new road. Social and political movements came together. In addition, the people of the princely states and the people of British India recognized their commonness.

In 1932, Mathrubhumi played a role in a pioneering referendum in which caste Hindus who lived in the area surrounding the Guruvayur temple voted decisively to open the temple’s doors to the long-excluded. Between the vote and actual entry, there was a gap of time, but the social revolution had become unstoppable.

Scholars from all over the world study old issues of Mathrubhumi. They and the rest of us should recognize that Mathrubhumi was more than a newspaper. It was a vehicle that connected Malayalis with one another in times of struggle, hope, or difficulty.

Looking back from this centenary, we see brave pioneers standing on distant high hilltops. We salute them.

The writer is an award-winning author and historian, who currently serves as Research Professor at the College of Education at the University of Illinois at Urban-Champaign.