Mathrubhumi has a unique position among newspapers of India: Modi 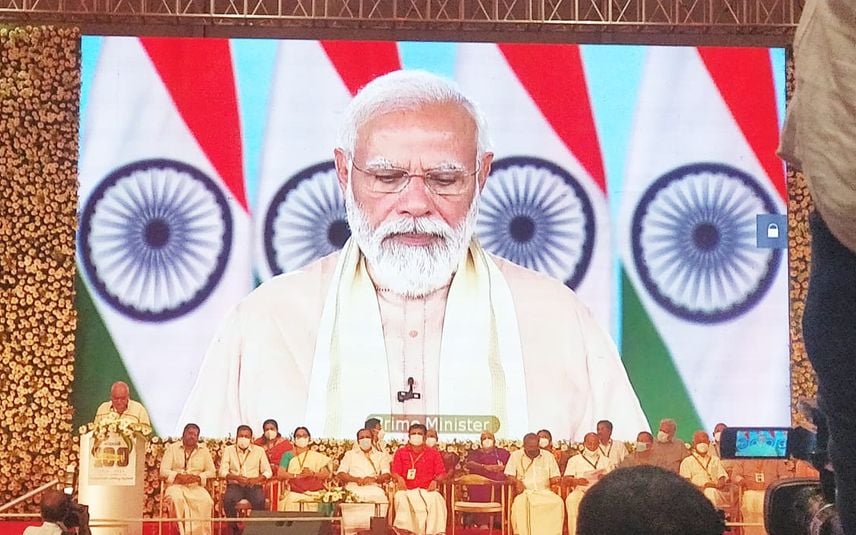 Kozhikode: The centenary celebrations of Mathrubhumi was inaugurated by Prime Minister Narendra Modi through online mode and a galaxy of eminent personalities were present at the Calicut Trade Centre in Sarovaram on Friday morning. PM Narendra Modi hailed the positive role played by media in promoting Swachh Bharat. Every media house took up this mission with great sincerity, he said while inaugurating the centenary celebrations of Mathrubhumi.

Narendra Modi said that Mathrubhumi played a key part in the glorious tradition of newspapers. He recalled the history of Mathrubhumi, highlighting the efforts taken by many eminent personalities like KP Kesava Menon, M. P. Veerendra Kumar and others in making Mathrubhumi a part of Kerala's history. Prime Minister also mentioned about the rich history of Mathrubhumi and pointed out the role of the newspaper in Indian independence struggle emphasising on Gandhian values.

Observing that the media has also played a very encouraging role in popularising Yoga, fitness and 'Beti Bachao Beti Padhao,' the Prime Minister said these are subjects beyond the domain of politics and political parties. "They are about making a better nation in the coming years", Modi said.

"Years ago, when Gandhiji visited Mathrubhumi, he had said that 'Mathrubhumi is an institution that stood firmly on its own feet. Only a few newspapers in India was able to do this. Hence among the newspapers of India, Mathrubhumi has a unique position'. Therefore, I am confident that Mathrubhumi will live up to these words of Bapu," Modi added.

Addressing the programme, also joined online by Kerala Chief Minister Pinarayi Vijayan and attended by dignitaries including Union Minister V Muraleedharan and state Tourism Minister P A Muhammed Riyas, Modi said in today's day and age, the world has many expectations from India. "When the COVID-19 pandemic hit our shores, it was speculated that India would not be able to manage things well. The people of India proved these critics wrong," he said.

Recollecting that Mathrubhumi was born by imbibing the spirit of independence struggle along with the social and cultural renaissance of the period, chief minister Pinarayi Vijayan said that at a time when even many national newspapers shut office due to political pressure, Mathrubhumi became one of the very few newspapers which withstood and survived the challenges posed by times.

“We all know what happened to the first English newspaper ‘Bengal Gazette’ established in India by an Irish national James Hicky at Kolkata. Then the threats faced by a newspaper published by a group of freedom fighters, especially with a motive of supporting the Indian independence movement, will be inconceivable”, said CM. Mathrubhumi always upheld the freedom of nation, self rule, democracy and socialist values along with strengthening the values of renaissance. CM concluded his speech by remembering the pioneers who led many reform movements in Kerala.

Speaking at the event, V Muraleedharan said : "Mathrubhumi played an omnipresent role in giving importance to nationalism and progressed under the guidance of editor KP Kesava Menon, a freedom fighter and a visionary. I also take this moment to recall K Kelappan, NV Krishna Warrier and others for their effort in leading Mathrubhumi." He also pointed out that the history of Mathrubhumi is not only limited to freedom struggle but also their fight against social evils in our society. Mathrubhumi will be remembered even after 100 years in the history of Kerala for these battles, he added.

Minister PA Mohammed Riyas has praised Mathrubhumi for its role in shaping the socio-economic and political situation in Kerala during the inaugural function of Mathrubhumi's year-long centenary celebration. "Mathrubhumi played a pivotal role in the development of our state. The importance of Mathrubhumi in Kerala and among Malayalee communities around the world is unparalleled. It is worth remembering that Mathrubhumi played a significant role in uplifting the state and turning it into a model state in India," he said.

Opposition leader V D Satheesan said Mathrubhumi has witnessed the socio-economic and political changes in the world. The newspaper has a significant place in the history of our state and holds firm of being the voice of Indian freedom struggle.

The prime minister also said that Mathrubhumi has a unique position among the newspapers of India and hoped it would live up to Mahatma's Gandhi's words.