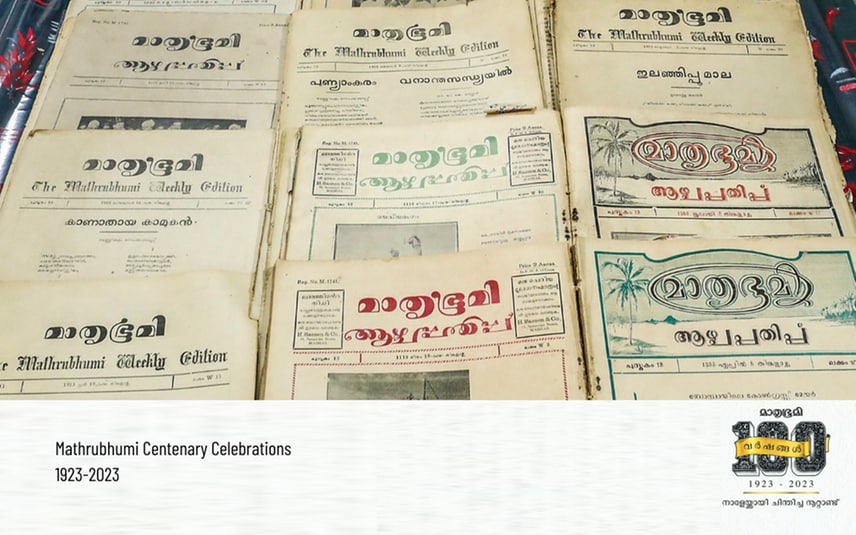 January 18, 1932, marked the start of a new chapter in the history of Mathrubhumi and, to an extent, the Cultural Renaissance in Kerala. That was the day when the first issue of the Mathrubhumi weekly came out. Mathrubhumi took it upon its shoulders to present the various faces of nationalism, humanity and human imagination. The first cover photo featured Mahatma Gandhi. The weekly was about the size of the newspaper folded in half. The weekly that had 26 pages cost about 2 annas. In the first edition, the editors themselves revealed the mission behind bringing out the weekly. The first poem ‘Ahimsa’ written by Vallathol had the essence of Gandhi in it.

The article ‘Paschyatharude Lingabandha Jeevitham’ and column ‘Rasikarasayanam’ by Kesari A Balakrishna Pillai appeared in the first edition of the weekly. The literary article was the sixth committee report of Samastha Kerala Sahitya Parishad. The article elaborated on how G Sankara Kurup responded to the critical comments made by P K Narayana Pillai. The investigation by G Sankara Kurup was published on February 15, 1932. Balamani Amma’s ‘Tulasimala’ came out in the same year. Changampuzha’s ‘Pookkalam’ was also published that year. P Kunhiraman Nair, Vyloppilli Sreedhara Menon, Edasseri Govindan Nair, Pala Narayanan Nair, Kadathanat Madhavi Amma, and VVK Nambiar wrote in the following issues of the weekly. The weekly witnessed the blossom and the fall of Edappally Raghavan Pillai’s poetry. His work ‘Ente Jeevitham’ was published on February 16, 1936. His final work ‘Maninadam’ came out on July 6. On July 20, Kuttikrishna Marar wrote about Raghavan Pillai. Changampuzha’s ‘Thakarnna Murail’ turned a homage for Raghavan Pillai.

P Kesavadev and Thakazhi’s literary life began from Mathrubhumi. Dev’s first article in the weekly was ‘Oru yachakiyude thoolikachithram’. Dev’s first reward was through the weekly. Thakazhi’s first article ‘Kannante Kadha’ was published first. The story ‘Vellapokkathil’ came after that. When K Kelappan became the editor of the weekly, Pottekkatt’s first work ‘Vaidyuthashakthi’ was published. He was rewarded by Mathrubhumi for his work.