Mathrubhumi and its efforts to intertwine literature with freedom struggle 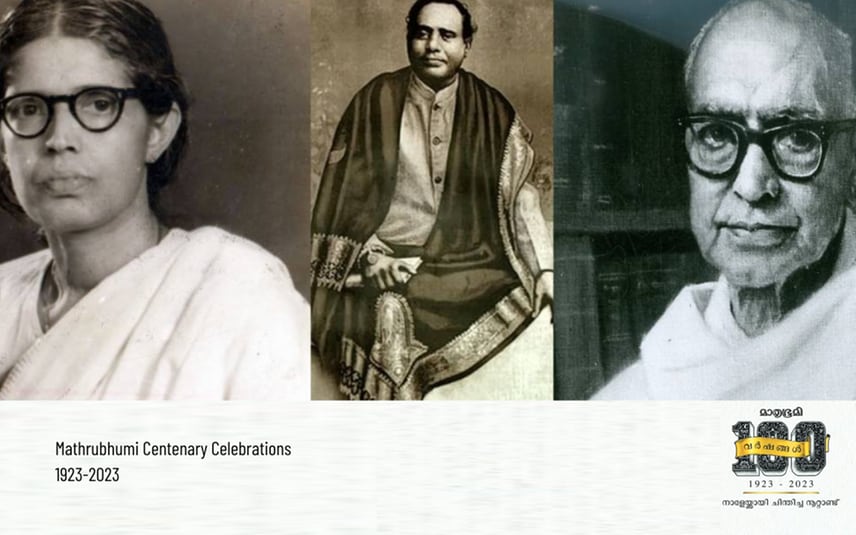 The pioneers of Mathrubhumi were aware that the struggles for independence needed the towering strength of art and literature to flourish. The message was evident when the poem ‘Ente Gurunathan’, one of the finest poems of Vallathol Narayana Menon, saw the light of day in the first newspaper of Mathrubhumi. Malayalis started to recite ‘Ente Gurunathan’ along with the song ‘Jaya jaya komala Kerala dharani…’ of Bodheswaran. Thus Kerala embraced the independence movement of the period by chanting the poem that hailed the principles of Mahatma.

The ultimate aim of the author and Mathrubhumi was to awaken Keralites and lead them to the freedom struggle of the nation. KP Kesava Menon, K Kelappan, K Madhavan Nair and Kuroor Neelakandan Namboothiripad were also the writers of the epoch. The prominent writers of the time, Kuttikrishna Marar, Madhavanar, Kunjappa and NP Damodaran also joined hands with them.

Readers celebrated the poem ‘Swathanthrya Gatha’ of Kumaranasan when it was published on March 29, 1923. Another poem under the same title penned by Asan came up on March 19, 1927 in the newspaper. Later poets like Ulloor, Sahodaran Ayyappan and Kadathanattu Madhavi Amma also wrote poems to be published in Mathrubhumi.

Though a literary publication was an urge of the writers, they could not realise it during the initial phase of the independence movement. Hence they decided to include a special column for literature regularly in the Mathrubhumi newspaper. ‘Vayanakkarude Kathukal’ and ‘Akshepangalum Abhiprayangalum’ were the other interesting spaces to publish readers’ response to these works.

Mathrubhumi presented poems of eminent authors during every festive season of Onam and Vishu. Special annual editions came up from 1928. The annual edition of 1931 had 150 pages and it was rich with the works of Vallathol, Ulloor, G Sankara Kurup and Nalapat Balamani Amma. The features of Kesava Menon, Kelappan and editor of Kaumudi, K Sukumaran BA, Moorkoth Kumaran and Kesari Balakrishna Pillai also stood out in the edition. When new writers entered the Malayalam literary circle in 1932, a separate publication became necessary for Mathrubhumi.