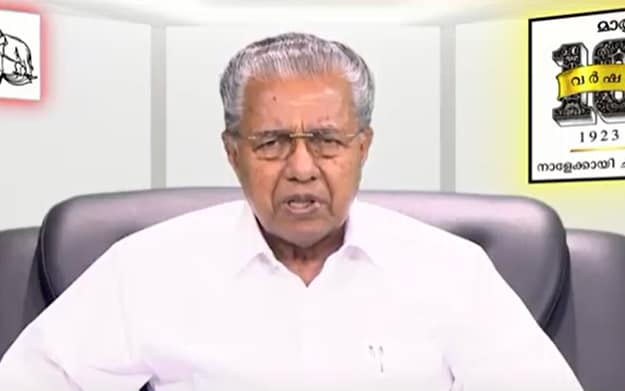 Kozhikode: At the Mathrubhumi centenary celebrations in Kozhikode on Friday, Chief Minister Pinarayi Vijayan joined the celebrations via online and delivered the keynote address. He was unable to be present physically due to the current assembly session in Thiruvananthapuram.

Recollecting that Mathrubhumi was born by imbibing the spirit of independence struggle along with the social and cultural renaissance of the period, Pinarayi he said that at a time when even many national newspapers shut office due to political pressure, Mathrubhumi became one of the very few newspapers which withstood and survived the challenges posed by times.

“We all know what happened to the first English newspaper ‘Bengal Gazette’ established in India by an Irish national James Hicky at Kolkata. Then the threats faced by a newspaper published by a group of freedom fighters, especially with a motive of supporting the Indian independence movement, will be inconceivable”, said CM. Mathrubhumi always upheld the freedom of nation, self rule, democracy and socialist values along with strengthening the values of renaissance. CM concluded his speech by remembering the pioneers who led many reform movements in Kerala.