87 years back, Mathrubhumi published a special page for women 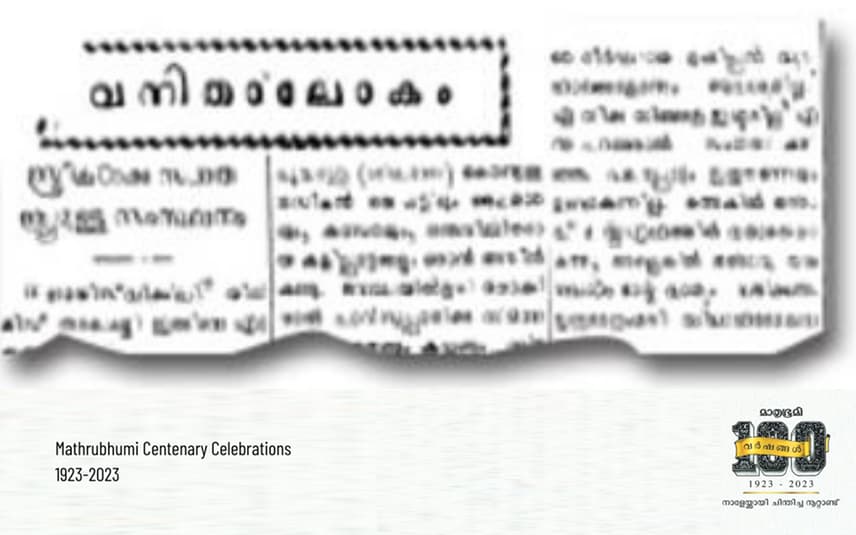 ​“Where do women feel safe…?” “It is in Kerala”- this question and answer were put forth in an article published by Mathrubhumi 87 years back.

The article titled ‘State ensures freedom for women’ was penned by Thangalakshmi and it appeared on the special page set aside for women on September 15, 1934. Mathrubhumi chose to issue the special page ‘Vanitha Lokham’, following the first widow marriage within the Namboothiri community in Kerala. The revolutionary move came up at a time when musing on a special page solely for women was perceived as out of the question.

The first edition of the column named ‘Sthreelokham’ comprised an article ‘Balikamarude Adharshangal’, based on the speech delivered by Rabindranath Tagore to girls. ‘Good behaviour shall sprout from the innate nature. It shall not be maintained artificially” Tagore advised the girls convened for the conference.

Women turned out to be full-fledged writers in Malayalam only by the end of 1920s. The pioneers among them were Kadathanattu Madhavi Amma and M Lakshmikutty Amma.

The articles of the poet Madhavi Amma appeared in Mathrubhumi for the first time in 1928. Lakshmikutty Amma’s features discussing the plight of women and their needs were published in the period spanning 1929-30.

In 1933, the newspaper started issuing the articles of Panangattu Kunjilakshmi Amma over child welfare, which was later taken up by the beloved writer of Malayalam literature Balamani Amma. With the writings of female authors like M Leelavathi, Hridayakumari and Sugathakumari, the Kerala society expanded its point of view and reached up to Arundhati Roy.