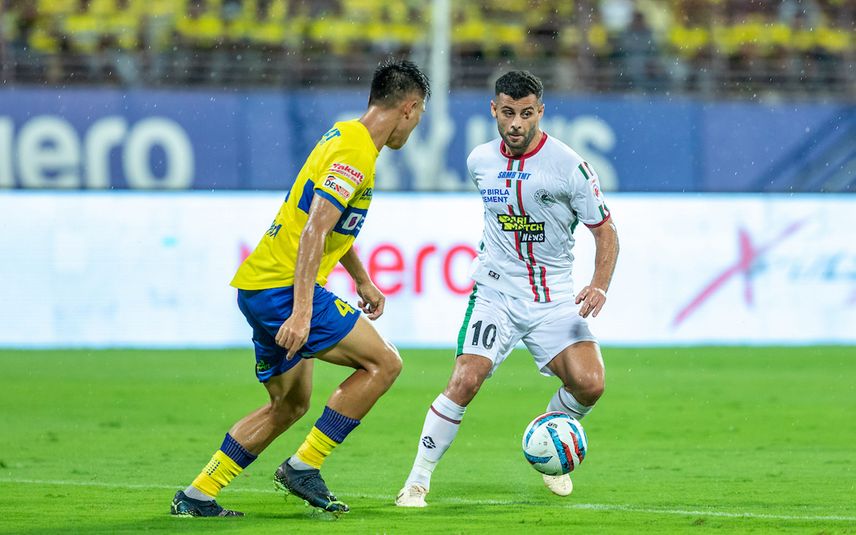 Hugo Boumous of ATK Mohun Bagan and Hormipam Ruivah of Kerala Blasters FC in action during their ISL 2022 match at the Jawaharlal Nehru Stadium | Photo: PTI

The win at the Jawaharlal Nehru Stadium ensured that the Mariners extend their undefeated streak against the Blasters to five games in the ISL.

The noise inside the Blasters' fortress reached a crescendo when Ivan Kaliuzhnyi put the hosts in front just six minutes into the game. Early pressure paid off as the Ukrainian combined well with Sahal Samad on the right before beating Vishal Kaith at the near post.

The stands were silenced in the 26th minute after Boumous sprinted down the left flank and skipped past Ruivah Hormipam before unselfishly putting it on a plate for Petratos to tap the equaliser in.

The game turned on its head in the 38th minute when Manvir Singh spotted Joni Kauko darting towards the box from midfield. The striker found the midfielder with a precise ball before Kauko smashed the ball into the back of the net, swinging the advantage over to the Mariners on enemy territory.

At the hour-mark, it got chaotic in the ATK Mohun Bagan box as Samad's cross to Carneiro was intercepted by Hamill. The defender's header, however, rattled the crossbar and came back into play before Dimitrios Diamantakos missed the ball while attempting an overhead kick. The ball stayed in play before Kaliuzhnyi put it out.

At the other end, two minutes later, Boumous played another beautiful pass through to Colaco. The winger raced into the box and rolled it into the path of Petratos who smashed it home to establish a two-goal cushion.

Florentin Pogba came on for Boumous in the 71st minute as the Mariners went on the defensive to protect their lead.

Nine minutes from the full-time whistle, a Vishal Kaith blunder enabled former U-17 World Cupper Rahul KP to pull one back. Rahul's cross from the right flank picked up a slight deflection and slipped through the gloves of Kaith and snuck into the goal from in between his legs as the Blasters pulled themselves back into the game.

Any hopes of a Blasters comeback were laid to rest when substitute Lenny Rodrigues pounced on a weak Jeakson miss pass in midfield and started a counter by playing it through to Petratos.

The Australian played the ball back to Rodrigues before the midfielder put his name on the score-sheet, two minutes from time.

Moments later, Rodrigues initiated another attack as he played an excellent ball to Colaco, who played it into the path of Petratos. The striker tapped it in from close range to complete a well-deserved hat-trick in second-half stoppage time.

The Blasters will be on the road for the first time this season as they travel to face Odisha FC on October 23 in their next fixture.

The Mariners will return home for the Kolkata Derby against East Bengal on October 29. PTI

We are in third spot, but there are no guarantees: Kerala Blasters coach ahead of Chennaiyin clash