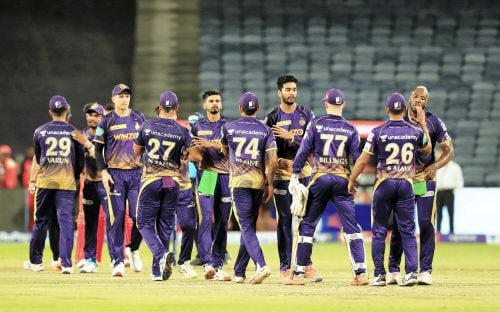 Russell hit an unbeaten 49 off 28 balls in Kolkata’s strong total of 177-6 and took 3-22 that included the key wicket of Kane Williamson off his second ball as Hyderabad slumped to 123-8 and a fifth consecutive defeat.

Kolkata kept alive its slim chances of reaching the playoffs.

Hyderabad needs to win both of its remaining games by massive margins and hope other results are in its favour to make the top four.

Kolkata made an impressive start in the batting powerplay as Ajinkya Rahane (28) and Nitish Rana (26) struck six sixes between them.

But India’s new young fast bowling sensation, Umran Malik (3-33), removed Rana and Rahane in his first over immediately after the powerplay. Malik then had captain Shreyas Iyer caught in the deep in the next over.

Sam Billings combined in a 63-run stand with Russell, who batted deep. He smashed three of his four sixes in the last over off offspinner Washington Sundar, who ended up with 0-40. Russell hit him for 20 off the last six balls.

“Plan was to give Russell as much strike as possible and we were praying that he plays the last over because Washington had an over left,” Shreyas said, adding, “It worked out pretty well.”

Williamson’s run of poor form continued for Hyderabad when he struggled for 17 deliveries before getting bowled by Russell on 9 while attempting an extravagant shot while moving across his stumps.

Abhishek Sharma top-scored with 43 and Aiden Markram made 32 but the rest of the batters couldn’t cope up with the pace and spin of Varun Chakravarthy.

Fit-again Umesh Yadav bowled well in the powerplay and took 1-19, Tim Southee grabbed 2-23, and Russell returned and dismissed Sundar and Marco Jansen in the 18th over. AP