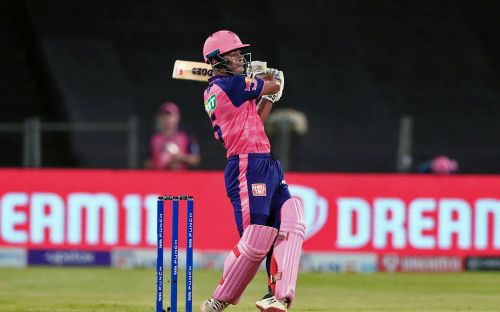 Parag’s 56 off 31 balls spurred Rajasthan to 144-8 but Bangalore’s struggle with the bat continued as it was bowled out for 115 in the final over.

Rajasthan’s sixth win in eight games has pushed it to the top of the points table on better net run-rate than Gujarat Lions, which also has 12 points from seven matches.

Despite losing its fourth game in nine matches, Bangalore stayed at No. 5 with 10 points.

“It was looking dicey after the 15 overs (but) Riyan showed the world how explosive he can be,” Rajasthan skipper Sanju Samson said. “The chat before the second innings was that in a total like this and conditions like this, it is tough for batters to change gears and it was a matter of putting in pressure.”

Parag’s gritty half century ensured Rajasthan had enough runs to challenge Bangalore, which was bowled out for just 68 in its last game against Sunrisers Hyderabad.

Josh Hazlewood and Mohammed Siraj had dented Rajasthan's top order in the first half of the innings with Hazlewood getting the key wicket of in form Jos Buttler for just eight runs inside the batting powerplay.

Samson was clean bowled by Wanindu Hasaranga for 27 after he attempted a reverse sweep against the Sri Lankan spinner off a delivery which was full pitched as Rajasthan slipped 68-4 in the 10th over.

But Parag, who arrived at the crease at the fall of Samson’s wicket, revived Rajasthan innings singlehandedly by scoring bulk of the runs as he hit four sixes and three boundaries in his match-winning knock.

Virat Kohli’s run of poor form this season continued and despite opening for the first time this season, the former skipper couldn’t get among the runs after his two consecutive scores of zeros in the last two matches.

Prasidh Krishna bounced out the experienced Kohli for only nine runs in only the second over after the former Bangalore skipper had hit two successive boundaries against Trent Boult’s opening over.

Kohli got the toe end of his bat off a short-pitched delivery and Parag grabbed the first of his four catches when he dived at backward point and plucked a good catch.

Kuldeep Sen’s (4-20) twin strike in the seventh over exposed Bangalore’s fragile middle-order when he had captain Faf du Plessis caught at short cover and then got Glenn Maxwell caught in the slip for a golden duck off the next delivery.

Ravichandran Ashwin then bowled well in the middle overs to finish with 3-17 as he also completed the tally of 150 wickets in his 175th IPL game.

The right-arm fast bowler Sen returned in the death overs and claimed two more wickets with Hasaranga mistiming a pull shot and offering a return catch to Sen while Parag taking a straightforward catch at long-on to dismiss last man Harshal Patel. AP