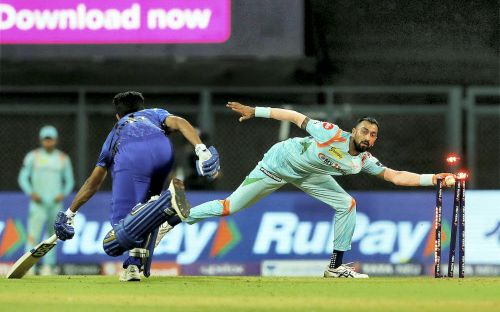 Mumbai: Lokesh Rahul hit his second hundred of the season as Mumbai Indians crashed to its eighth straight defeat in the Indian Premier League on Sunday.

Lucknow lost Quinton de Kock (10) early after Mumbai won the toss but Rahul, who also scored 103 not out on April 16 against Mumbai, stroked his way to a half-century off 37 balls. He put on 58 runs with Manish Pandey (22).

The skipper smacked 12 fours and four sixes overall during his 62-ball stay to score his fourth IPL hundred overall. It was Rahul's third IPL century against Mumbai, the first of which came in 2019.

Mumbai’s bowlers had a good outing as they restricted Lucknow to a par score. Jasprit Bumrah returned 1-31 in four overs, while Kieron Pollard took 2-8 in two overs. Riley Meredith had 2-40.

Daniel Sams (1-40) struck the big blow when Marcus Stoinis, promoted to No. 4, was out for a three-ball duck.

Lucknow suffered a middle-order collapse, falling to 121-5 in 15.3 overs, before Rahul rescued them.

Mumbai’s return to the Wankhede Stadium after two years went from bad to worse as it began the chase.

It lost Ishan Kishan (8) and Dewald Brevis (3) cheaply. Skipper Rohit Sharma (39) got another start, but ultimately skied a catch off Krunal Pandya (3-19).

Tilak Varma threw his bat around to score 38 off 27 , but his innings was insufficient. Pollard was out for 19 off 20 balls to Pandya.

Dushmantha Chameera finished with his most economical figures in T20 cricket with 0-14 from four overs.

“It was a hard-fought win. We planned and executed well," Pandya said. "Rahul’s knock was terrific and he is leading from the front. We bowled slower and made it hard for their batters.”

Lucknow climbed to fourth and is tied on 10 points with Sunrisers Hyderabad, Rajasthan Royals and Royal Challengers Bangalore. AP