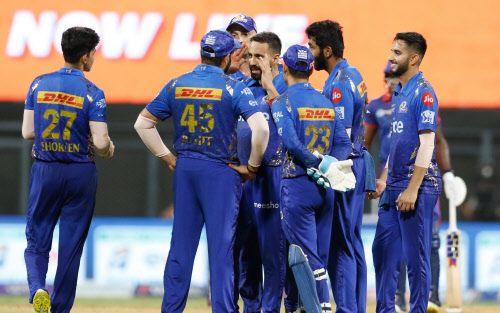 Mumbai: The last-placed Mumbai Indians dashed the Delhi Capitals' hopes of making the Indian Premier League playoffs in a five-wicket win on Saturday.

Delhi’s defeat paved the way for Royal Challengers Bangalore to confirm fourth place and complete the playoffs lineup. On Tuesday, IPL leaders Gujarat Titans meet Rajasthan Royals for a place in the final. On Wednesday, Bangalore play Lucknow Super Giants in an eliminator.

Tim David’s 34 off just 11 balls proved decisive in Mumbai’s successful chase to reach 160-5 with five balls to spare. Delhi was made to rue not asking for a caught behind television referral against David off the first ball he faced when video suggested the batter got a faint edge.

Delhi put up 159-7. Rovman Powell top-scored with 43 and Jasprit Bumrah picked up 3-25 with his pacy short-pitched deliveries.

Powell revived Delhi’s innings in a fifth-wicket stand of 75 with Pant, who made 39 off 33 balls.

Mumbai's chase began with another failure by skipper Rohit Sharma, who scored 2 off 13 before he chipped a tame catch to mid-on. Rohit ended the season with 268 runs in 14 games and no half-century.

The Mumbai batters were kept in check in the middle overs by bowlers Mitchell Marsh and Axar Patel, and Shardul Thakur clean bowled Dewald Brevis on 37 in the 15th over to be 95-3.

David arrived and tried to drive Thakur first up and got a thin edge, but captain Rishabh Pant didn’t go for the referral which eventually cost Delhi a place in the playoffs.

“I thought there was something but everyone standing in the circle was not convinced enough,” Pant said. “I was asking should we go up, (but) at the end, I didn’t take the review.”

David smashed four sixes and two boundaries off the next nine balls before Thakur eventually got the leading edge off David’s bat. But he'd brought down the target to nearly a run a ball.

Pant said his bowlers also struggled to stick to their plans with the dewy ball. AP