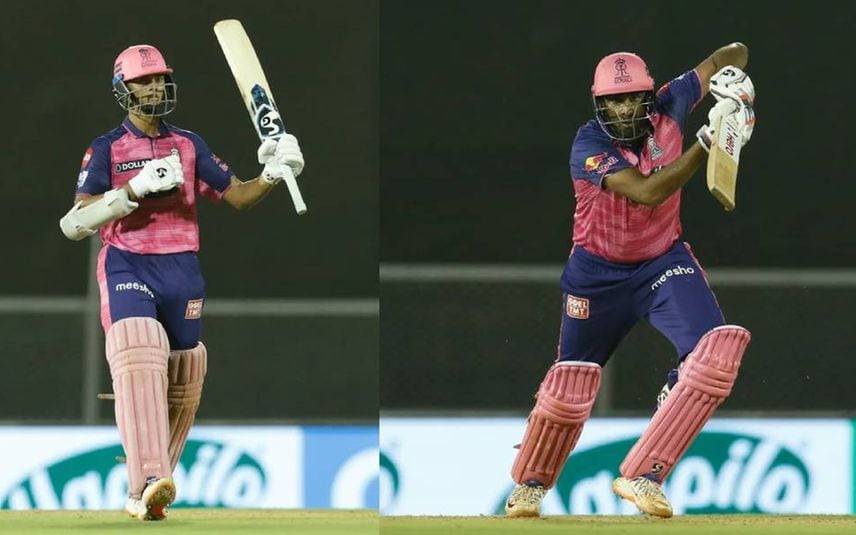 RR chased down the target of 151 with two balls to spare, with Yashasvi Jaiswal top-scoring with 59 and Ravichandran Ashwin chipping in with 40 not out / Photo: iplt20.com

Mumbai: Yashasvi Jaiswal struck a well-controlled 59 and Ravichandran Ashwin blasted a 25-ball unbeaten 40 as Rajasthan Royals defeated Chennai Super Kings by five wickets in Match 68 of IPL 2022 and moved up to the second spot in the points table.

Chasing a modest 151 for victory, Rajasthan Royals faced a few anxious moments in the middle of the innings but in the end, Ashwin, along with Riyan Parag (10 not out) ensured that they reached 151/5 in 19.4 overs for their ninth win of this edition of IPL.

The victory took them to 18 points, the same as Lucknow Super Giants but they took second place with a better net run rate of 0.298 as compared to 0.251 of LSG.

CSK ended their campaign with eight points from 14 matches, opening a chance for Mumbai Indians to win their match against Delhi Capitals and push them down to the bottom place on net run rate.

Rajasthan Royals will have to thank Jaiswal, who struck 59 off 44 deliveries, hitting eight boundaries and one six, and also Ashwin, who guided them home with a superb cameo of 49 not out off 23 balls, hitting two fours and three sixes.

Rajasthan Royals made a sedate start as they reached 52/1 in the powerplay. They lost their top batter Jos Buttler for 2 in the second over as he tried to sneak a fullish, wide delivery that moved a bit and took the edge to Moeen Ali at slip. But Jaiswal continued to play a controlled inning, waiting for the right ball to hit boundaries. He added 51 runs with skipper Sanju Samson (15) as Royals raised hopes of reaching the target with a lot to spare.

But it turned out to a nerve-jingling task for Rajasthan Royals as they lost their way in the middle overs. First skipper Sanju Samson was brilliantly plucked out by Mitchell Santner off his own bowling, the tall New Zealander jumping up to catch a full-blooded shot by Samson. Rajasthan were down to 67/2 in the ninth over.

Devdutt Padikkal added only three runs to the score as he was cleaned up by Moeen Ali, playing his sweep shot all over as the ball stopped a bit.

Jaiswal and Ashwin took the score past the 100 run mark before the opener departed, after a well-made 59 that included eight boundaries and one six, Jaiswal struck Mukesh Choudhary for fours off successive deliveries in the third over and also flicks him off his legs for a boundary in the fifth over.

He also struck Simarjeet Singh for a boundary and blasted Prashant Solanki for his lone six over long-on. He was out mistiming a heave off a half-tracker trying to go for a six and Matheesha Pathirana nearly makes a hash of the attempt before completing the catch.

Wtih Rajasthan Royals down to 104/4, their hopes depended on Ashwin and Simron Hetmyer. But the West Indies batter's scratchy innings came to an early end when he skied a massive slog-sweep and was caught by Devon Conway -- at 112/5 in 17th over, Rajasthan were looking in serious trouble.

But Ashwin held his nerve, and played some streaky and some superb shots as he guided Rajsthan Royals home. He hammered Solanki and Choudhary for a six apiece and struck Pathirana for a couple of fours taking Rajasthan victory. Riyan Parag played able foil as he remained not out on 10 off 10 balls while Ashwin remained unbeaten on 40 runs.

For CSK, Prashant Solanki grabbed 2/20 off two overs while Samarjeet Singh claimed 1/18 and Mitchell Santner got 1/15 off three overs apiece. But in the end, CSK bowlers did not have enough runs to defend as they ended their campaign with another defeat.