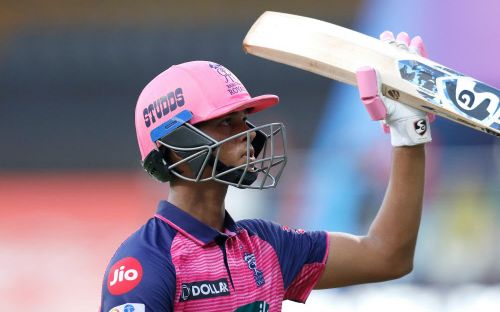 Mumbai: Fiery half-century by Yashasvi Jaiswal and a three-wicket haul by Yuzvendra Chahal, provided Rajasthan Royals with a six-wicket win over Punjab Kings, here at the Wankhede Stadium, on Saturday.

Jaiswal smashed 68 runs off 41 balls, which was followed by a quick cameo from Shimron Hetmyer of 31 runs off 16 balls, which gave Rajasthan their seventh win, with two balls to spare.

Chasing 190, Rajasthan had a brilliant start as their opening batters Jos Buttler and Jaiswal smashed 14 runs in the first over. Buttler smashed one six and two fours back-to-back, before getting caught by Bhanuka Rajapaksa on Kagiso Rabada's delivery, in the fourth over, with the team's total at 46/1.

Skipper Samson came to the crease with Jaiswal and continued the carnage. The duo kept on thrashing Punjab bowlers and took their team's score to 85 runs in 8 overs. Punjab then took a sigh a relief when Rishi Dhawan dismissed Samson in the 9th over for 23 runs off 12 balls, with team's score at 85/2.

Samson's departure slowed down Rajasthan's batting pace for some time but that gap got compensated by Jaiswal, who brought up his half-century in 33 balls. Along with Devdutt Padikkal, Jaiswal took his side across the 100-run mark in 11 overs.

Jaiswal then smashed 14 runs in the 13th over, which was bowled by Rishi Dhawan and kept the momentum in the favor of Rajasthan. It was finally in the 15th over, when Liam Livingstone sent scalped Jaiswal's wicket, where he departed after playing a crucial knock of 68 runs off 41 balls.

Padikkal was joined by Shimron Hetmyer and the duo steadily kept the scoreboard moving for their side. They smashed 16 runs off the 18th over and brought the equation to 11 runs off 12 balls.

Arshdeep Singh then provided Punjab with a major breakthrough as he dismissed Padikkal, leaving the team's total at 182/4. He conceded only 3 runs in the 19th over and Rajasthan requires 8 runs off 6 balls.

In the 20th over, which was bowled by Rahul Chahar, the first delivery turned out to be a wide. Hetmyer delivered the second ball off the stands for a six and completely turned the game in Rajasthan's favor. He then took a single on the fourth ball and provided his side with a six-wicket win.

Earlier, fifty from Jonny Bairstow (56*) and cameos from Jitesh Sharma (38*) and Liam Livingstone (22*) at the end powered Punjab Kings to a solid 189/5, at the end of the first innings.