IPL 2022: It was full toss and umpire sticked to his decision: Sanju Samson on no-ball controversy 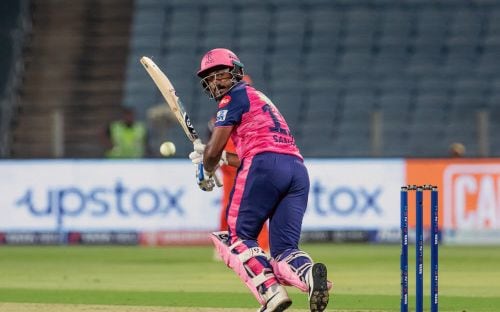 Mumbai: RR Skipper Sanju Samson has opined that the umpire's refusal to check a no-ball in the final over of the thriller match between Rajasthan Royals and Delhi Capitals was very clear and he had stuck to it.

With 36 runs needed in the last six balls for Delhi Capitals, Rovman Powell hit six of the first two balls of the over to left-arm pacer Obed McCoy. In the third ball, he again hit a full toss ball for a maximum and that full toss according to Delhi Capitals captain Rishabh Pant and team management was a no-ball.

But the on-field umpire did not give a no-ball and even refused to consult the third umpire hence Pant threatened to forfeit the match and asked both Powell and Kuldeep Yadav to come out of the field.

"It went for a six, it was a full toss and the umpire gave it a normal ball. But the batsman wanted it as a no-ball. I think the umpire made his decision very clear and sticked to it, We wanted to be around him (McCoy) and wanted to put a smile on his face. Not easy for a bowler after conceding three sixes. We wanted to change the plan so we took our time, to give the bowler a breather," said Sanju Samson in a post-match presentation.

With this win, the inaugural champions go to the top of the points table with five wins in seven matches. In a match chasing a mammoth target of 223 runs, Delhi were restricted to 207/8 and lost the match by 15 runs.

"The last game was a tough one, and this game too, with Powell hitting those sixes. It's important to stay calm and trust your teammates. You need to back yourself. Can't say anything about the toss. Losing toss is working, so we'll like to stick to that. Don't think there was much dew, but the bowlers are experienced enough to bowl in these conditions," he added.

Captain Sanju Samson played his 100th match for Rajasthan Royals - and he also went on to notch up over 5000 runs in T20s. Samson helped his team notch up 222/2 in 20 overs. Samson scored an unbeaten 46 off 19 balls hitting five fours and three sixes.

"Ashwin and Chahal have been bowling well, touch wood we continue to do it. It is normal to drop catches, even I dropped one in the last match. I told the players how to recover from that in the team meeting. He (Buttler) has been playing well, and that's a crucial part in this format. DDP is a smart cricketer and there's a lot more to come from him," said Samson. ANI