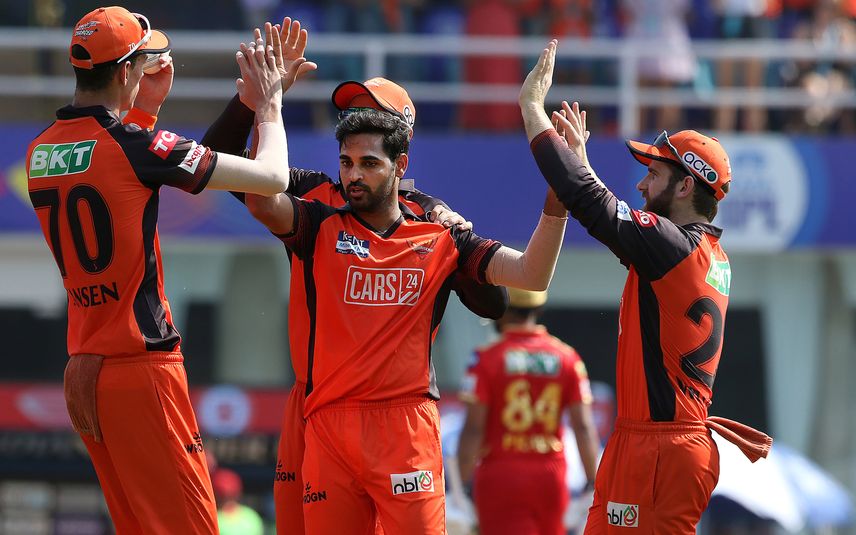 Bhuvneshwar Kumar of Sunrisers Hyderabad celebrates with teammates after the wicket of Shikhar Dhawan, captain of Punjab Kings. Photo: PTI

Navi Mumbai:Umran Malik (4/28) and Bhuvneshwar Kumar (3/22) shared seven wickets between themselves while Aiden Markram and Nicholas Pooran exhibited confidence and calmness in equal measure as Sunrisers Hyderabad defeated Punjab Kings by seven wickets at D.Y Patil Stadium on Sunday to register their fourth win on the bounce in the tournament.

After bowling out Punjab for 151, Hyderabad were in trouble at 77/3 in 10.3 overs. Markram and Pooran joined forces for an unbroken 75-run stand in 8.2 overs to take Hyderabad to victory with seven balls to spare. The result means that Hyderabad enter the top-four stage in the points table.

Hyderabad lost Kane Williamson in the fourth over, playing an uppish drive straight to mid-off off Kagiso Rabada. Rahul Tripathi, fresh from a dazzling 71 against Kolkata Knight Riders, began his innings by dancing down the pitch against Rabada to lift over a leaping mid-off.

He got going by smacking Vaibhav Arora for back-to-back fours, a cut through point was followed by a scoop over fine leg. Tripathi hitting the ground running meant Abhishek Sharma found time to set in and take three boundaries in power-play.

Post power-play, Rahul Chahar leaked 14 runs in his first over with wides and misfields coming into play. Tripathi used his wrists well to welcome Odean Smith with a flicked six over backward square leg. But Chahar brought his sparkling knock to an end at 34, getting some drift in, turn and dip, forcing Tripathi to miscue the loft to long-off. Two overs later, Chahar had his second wicket as Sharma holed out to long-on.

Markram and Pooran indulged in risk-free cricket while dispatching short and overpitched balls to the boundary rope. The duo rotated the strike well and were cautious against Chahar's remaining overs. There was almost a run-out of Markram in the 14th over but Rabada missed the chance.

Earlier, Kumar set the tone for Hyderabad's top-notch bowling performance with wickets upfront and at the back end. At the other end, Malik used his pace and lengths well to bag his maiden four-fer in the tournament, including a fantastic final over where four wickets fell for no run, with a run-out on the final ball of the innings.

For Punjab, Liam Livingstone top-scored with 60 in a performance where they struggled to get going at the top in absence of regular opener and captain Mayank Agarwal. He also shared a stand of 71 with Shahrukh Khan (26) to lend some respectability to Punjab's total.

Punjab lost openers Shikhar Dhawan and Prabhsimran Singh in the power-play. While Dhawan came down the pitch to pull off Kumar but found mid-on, Singh missed the flick off T Natarajan as the ball took an inner edge to the keeper.

Livingstone began his knock by scooping Marco Jansen for a four followed by cover drive for another four and ended power-play with a six scooped by using the pace from the left-arm pacer over fine leg.

Post power-play, Jonny Bairstow was trapped lbw while trying to sweep against Jagadeesha Suchith. Jitesh Sharma hit Malik for two fours but the tearaway pacer had the last laugh as he bounced out Sharma and took the catch off his own bowling.

Amidst wickets falling, Livingstone continued 'o get runs, using Malik's pace to uppercut over third man. He further attacked Malik in the 12th over, swivelling a six-over deep mid-wicket followed by a four thumped down the ground.

Livingstone and Khan struck a six each off Suchith followed by the latter swinging Natarajan over deep square leg to bring half-century of the partnership. Though Natarajan conceded 10 runs in 'he 16th over, Khan couldn't get any boundaries and in search of it, miscued a short outside off delivery from Kumar to cover.

Livingstone and Smith hit a four and six each. But Kumar took out Livingstone with a short ball sliced straight to cover. Malik then bowled a sensational final over, a four-wicket maiden, including back-to-back bowl'd wickets to wrap up Punjab's innings at 151.