Gujarat Titans may have hit a speed-bump in their game against Royal Challengers Bangalore (RCB) on Thursday night, but those following the Hardik Pandya-led side negotiate the tricky and nerve-jangling IPL 2022 season, know that the newbies in the tournament have nearly perfected the winning formula in the first year of their inception itself, from where the side can only scale greater heights. 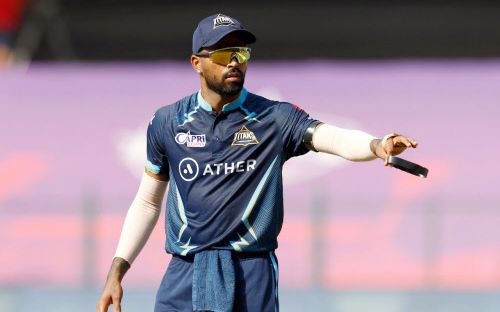 Mumbai: Gujarat Titans may have hit a speed-bump in their game against Royal Challengers Bangalore (RCB) on Thursday night, but those following the Hardik Pandya-led side negotiate the tricky and nerve-jangling IPL 2022 season, know that the newbies in the tournament have nearly perfected the winning formula in the first year of their inception itself, from where the side can only scale greater heights.

Scepticism abounded as people questioned their picks during the IPL mega auction, but as the tournament progressed they began to defy expectations, pulling out wins from nowhere.

On one of those rare bad days, when perhaps the law of averages caught up with them, the team still fought tooth and nail to manage a respectable 168/5, with the skipper himself leading from the front with an unbeaten 47-ball 62.

As the business end of the tournament approaches, some of the standout reasons for the team's success have been Pandya's captaincy, David Miller's solidity in the middle overs, and Rahul Tewatia's final flourish.

Before the 2022 season began, no one knew what to expect from Pandya, the captain. The skipper was recovering from back injuries, and to add to it, he was leading an IPL side for the first time. Setting a relaxed atmosphere was the key. Crucially, the relaxation came in the form of security in the players' minds.

Pandya found the balance between being true to his own self and being a thinking captain, and an inspirational leader. He was smart with his bowling changes, making intelligent decisions with the batting order, even as he assumed responsibility with bat and ball. With the all-rounder delivering with the bat and ball, it added a new dimension to the team, as only a handful of cricketers can play all three roles -- bat, bowl and also lead the side.

South African 32-year-old white-ball specialist David Miller had come into IPL 2022 on the back of successive seasons where he couldn't do justice to his talent. The veteran of 143 ODIs and 95 T20Is was given the responsibility to lend solidity to the lower-middle order, and he rose to the challenge.

While being good at negotiating pace, he also added a skillset against spin. This season he has scored 381 runs in 14 matches, remaining unbeaten on seven occasions with a highest score of 94 not out. Even CSK coach Stephen Fleming was in praise of the middle-order stalwart, saying, "It's the thing with weaknesses with players: they're very aware of them, and they go away and work on them to make them better. Quality players often make a few changes and come back better for it. And the way David (has) played, you would say that would be the case."

Tewatia's magical innings in Sharjah -- where playing for Rajasthan Royals in 2020 he smashed five sixes in Sheldon Cottrell's 18th over as he stunned Kings XI Punjab -- will always be spoken about in glowing terms.

In between, he went cold. But turning out in Titans' colours, he has discovered his old self. He quickly figured out that the bowlers were going wide outside off to him, and that he needed to develop that area of the game. He worked on that, came back, and started dominating the bowlers.

"I had improved my off-stump game quite a bit from the start of the IPL and hit quite a few shots," Tewatia said. "Because bowlers had begun planning and keeping the field outside off stump, so I thought that if I can hit my shots in the gap, I can get boundaries there too. So I could open up the game on both sides."

To add to the that, Hardik and head coach Ashish Nehra have forged a winning partnership, keeping the atmosphere light, while at the same time driving competition in the side, making Gujarat Titans the the side to beat in the tournament.
ians