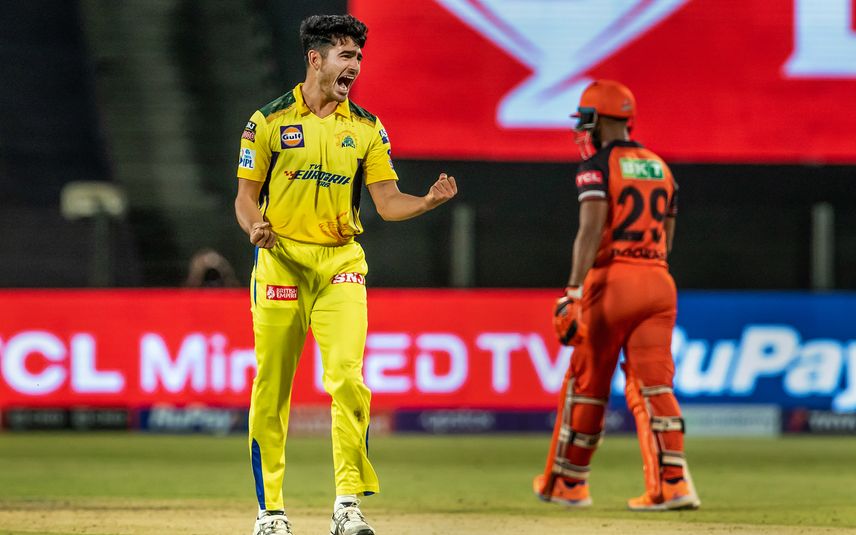 With MS Dhoni back at the helm, Chennai displayed its swagger of old to win by 13 runs.

The Gaikwad-Conway stand was the highest-ever partnership for Chennai in IPL history as it reached 202-2 in 20 overs. Hyderabad, which won the toss, was restricted to 189-6 in reply.

The previous best stand for Chennai was 181 between openers Faf du Plessis and Shane Watson against Punjab Kings in the 2020 season.

Gaikwad rediscovered his hitting form and smacked 99 off 57 balls. It was his second half-century of this IPL season, and included six fours and six sixes.

Conway scored his first half-century for the Super Kings and notched his highest IPL score with 85 not out off 55 balls, including eight fours and four sixes.

Overall, their partnership was the fourth-best opening stand in IPL history. Jonny Bairstow and David Warner still hold the record for the first wicket with 185 runs for Hyderabad against Royal Challengers Bangalore in the 2019 IPL season.

Nicholas Pooran scored 64 not out off 33 balls, including six sixes. It was his first half-century for the Sunrisers but not enough on the day.

Last-but-one Chennai has six points from nine games. It needs to win all five remaining games to have any chance of making the knockout stage.

Hyderabad had its second consecutive defeat, and is fourth with 10 points from nine games.

Lucknow Super Giants held on for a narrow six-run win over Delhi Capitals in Sunday's early game despite late heroics from Axar Patel who finished on 42 not out off 24 balls.

Skipper Lokesh Rahul scored 77 off 51 balls to help Lucknow reach 195-3 in its 20 overs after it opted to bat first. In reply, Delhi fell just short, reaching 189-7 despite the late batting charge.

Rahul combined with Quinton de Kock (23) for a 42-run stand and then added another 95 runs with Deepak Hooda (52) for the second wicket.

Lucknow set a quick pace, scoring nearly 10 runs per over for most of its innings as Rahul and Hooda put Delhi’s attack to the sword.

It was Rahul's fourth 50-plus knock this season to give him 451 runs for the season from 10 innings.

Hooda scored his third half-century before falling to Shardul Thakur (3-40).

Marcus Stoinis scored 17 not out off 16 balls, as Rahul took charge of the final overs though in the end Lucknow failed to breach the 200-run mark.

In reply, Delhi made a poor start, losing both openers Prithvi Shaw (5) and David Warner (3) cheaply.

At 13-2, Delhi was reeling but Mitchell Marsh launched a counterattack to bring the side back into the game.

The Australian hit three fours and three sixes to reach 37 off 20 balls. At the other end, Rishabh Pant hit seven fours and a six to score 44 off 30 balls.

The duo put on 60 runs off only 25 balls to resurrect Delhi’s hopes. Lucknow appeared to be helping Delhi's cause with a horrendous fielding display.

Marsh was out caught in the eighth over and Lalit Yadav soon followed when he was bowled off Ravi Bishnoi as Delhi stumbled again to 86-4.

But the Super Giants’ fielders then dropped three catches and missed two run-out opportunities to allow Delhi to creep closer to Lucknow’s total.

Mohsin Khan (4-16) bowled Pant in the 13th over to tip the scales again. Rovman Powell, though, had different ideas as he hit 35 off 21 balls, including three fours and two sixes.

Then Patel’s late surge ensured Delhi was in the hunt when the final over began with 21 runs needed.

But Stoinis held his nerve allowing Lucknow to register its third consecutive victory. The win moves the Super Giants to second in the table with 14 points from 10 games.

Delhi is sixth with eight points from nine matches.

Kerala Rain: Holiday declared for all educational institutions in 9 districts, ...