Failing to come out of his shadow, Jadeja hands back CSK captaincy to Dhoni

CSK have lost six out of their eight matches so far and Jadeja wants to concentrate more on his game. They are scheduled to clash with Sunrisers Hyderabad in Pune on Sunday. 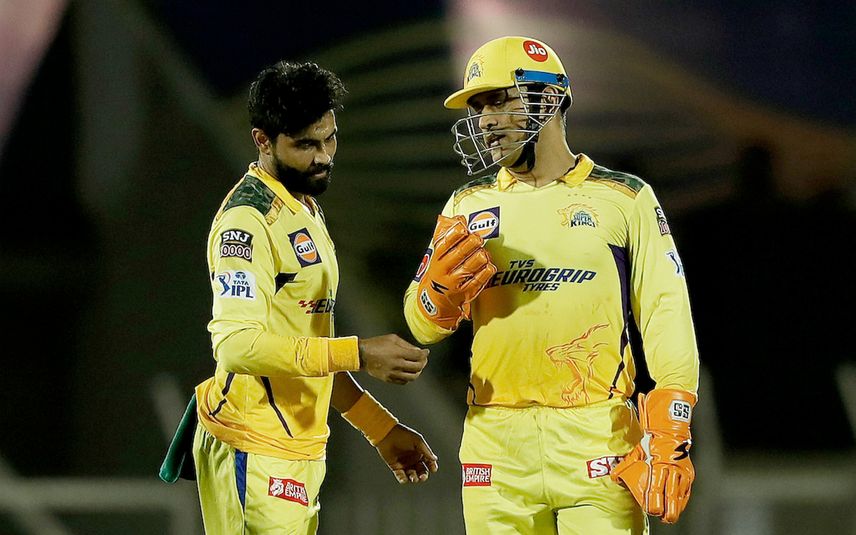 New Delhi: Mahendra Singh Dhoni was on Saturday handed the reins of the Chennai Super Kings yet again after Ravindra Jadeja "relinquished" the captaincy to focus on his game, following team's miserable run in the ongoing edition of Indian Premier League (IPL).

CSK have lost six out of their eight matches so far and Jadeja wants to concentrate more on his game. They are scheduled to clash with Sunrisers Hyderabad in Pune on Sunday.

The development shows that Indian team's most dependable all-format all-rounder struggled to come out of his illustrious predecessor's shadow after being asked to lead the 'Canary Yellow' brigade at the beginning of the league.

"Ravindra Jadeja has decided to relinquish captaincy to focus and concentrate more on his game & has requested MS Dhoni to lead CSK. MS Dhoni has accepted to lead CSK in the larger interest & to allow Jadeja to focus on his game," CSK said in a statement.

Jadeja's own game has also suffered due to the pressure that comes with leadership responsibility. He has scored only 112 runs and taken five wickets in the eight games so far.

While CSK won their fourth IPL title under Dhoni with a 'Dad's Army' last year, the legendary former India skipper wanted to prepare someone for this responsibility and thus, the second senior-most player Jadeja was thrust into the leadership role.

The official announcement came a day before CSK started their campaign.

However, Jadeja looked ill at ease from the start of his leadership assignment and the aura of Dhoni always being around made it all the more difficult for the Saurashtra cricketer to be his own man.

In fact, in most of the games, he was seen fielding at the deep and it was Dhoni who took the decisions leaving no ambiguity as to who was actually in-charge.

On one occasion, a decision about a crucial bowling change, was done by Dhoni in consultation with Bravo even as Jadeja was seen running towards them from his deep mid-wicket position to take part in the discussion.

However with decision taken, he trudged back midway and it didn't go unnoticed by millions of fans who wanted clarity as to who was calling the shots.

In fact, Jadeja changed the norm of usual CSK press conferences where Stepehen Fleming attends it as a formality and no one else ever comes to air their views in media.

Jadeja bucked the trend and tried to put up a defence that being team's best fielder, he had to man the deep. Losing Deepak Chahar was also a big blow for Jadeja as he lacked potent bowling option and had to manage with roookies like Mukesh Choudhary.

In reality, Jadeja's ascension was a lot about CSK's second in command for years Suresh Raina losing form and being released by the franchise. It was more of a distress move with distinct lack of options.

"In an ideal world, till 2020, it was Raina who was always the natural successor to Dhoni having lead whenever he has been injured. But when he lost form and was released, CSK didn't have a second line of leadership ready," an IPL insider told PTI on conditions of anonymity.

"For the record, Jadeja had only led Saurashtra once, that too at junior level 14 years back."

In fact, one of the prominent current India players, who is leading another franchise in the tournament was sounded out by CSK with offers of joint captaincy alongside Dhoni but the player declined, knowing that in case the team failed, the blame will be upon him and if the team won, the accolades will all go to Dhoni.

While Jadeja on record said that Dhoni had told him about CSK captaincy at least two months before the IPL began, there were lot of conjectures as to why the announcement was made 24 hours before the start of the tournament.

"Look, nothing happens in CSK without MSD's approval. He is the first, second, third and last word when it comes to cricketing matters. Doesn't matter who captains the side.

"If CSK would have announced Dhoni's decision to step down two months before IPL, it would have affected the potential team sponsors' morale. Once the sponsors were all locked in, it's safer to make an announcement," a BCCI insider, who has been tracking developments explained.

With CSK currently placed ninth, there is only a mathematical possibility of making it to the play-offs but Dhoni in charge can still intimidate opposition team.

But it will be interesting as to who agrees to lead the team next year if Dhoni decides to continue playing while closing in on his 42nd birthday in 2023.