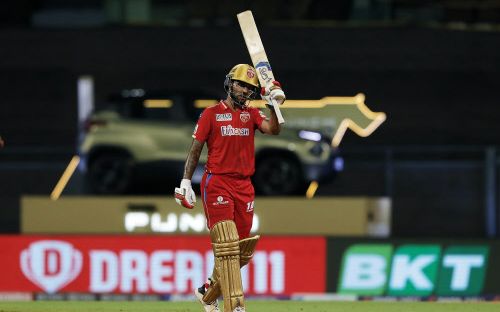 Mumbai: Flamboyant opener Shikhar Dhawan struck a magnificent 88 not out to trump Ambati Rayudu in the battle of batting heroics as Punjab Kings beat Chennai Super Kings by 11 runs in an IPL thriller here on Monday.

Dhawan hit nine fours and two sixes in his 59-ball superlative unbeaten knock to power Punjab to 187 for 4 after being asked to bat. Punjab then restricted CSK to 176 for 6 despite a stunning 39-ball 78 from Rayudu, studded with seven fours and six sixes.

Dhawan also became only the second batter after Virat Kohli to complete 6,000 runs in IPL history.

Rayudu hit three consecutive sixes and a four to take 23 runs from the 16th over bowled by Sandeep Sharma (1/40) after CSK needed 70 runs from the last five overs.

But Arshdeep Singh conceded just six runs in the next over and eight in the 19th to tilt the scale towards Punjab.

After Rayudu was out in the 18th over off Kagiso Rabada (2/23), CSK still needed 35 runs from 13 balls and the great finisher Mahendra Singh Dhoni (12) joined captain Ravindra Jadeja (21 not out) in the middle.

CSK needed 27 from the final over and another stage was set for Dhoni to repeat his stupendous finishing act against Mumbai Indians in their previous match.

Dhoni hit Rishi Dhawan (2/39) for a six in the first ball but two balls later, the legendary wicketkeeper batter was caught at deep midwicket as it was all over for CSK.

This was CSK's sixth loss in eight matches while Punjab notched up their fourth win in eight games.

CSK began their run chase on a woeful note as they lost Robin Uthappa (1) in the first over, followed by Mitchell Santner (9) in the second, as the defending champions could only score 32 from the powerplay overs.

Shivam Dube showed promise but then his innings lasted just eight balls and seven runs as CSK were reduced to 40 for 3 in seven overs.

With the asking rate crossing 11 an over so early, somebody had to get the boundaries for CSK and here veteran Rayudu showed his class. He hit a big six off Rishi Dhawan to take CSK to 69 for 3 at halfway mark.

He kept on attacking the Punjab bowlers with another six off Liam Livingstone as CSK had some momentum going with the combination of Rayudu and Ruturaj Gaikwad (30).

But the duo parted ways with Gaikwad getting out in the 13th over. But Rayudu was going great guns, reaching his fifty from 28 balls with a six off Rahul Chahar.

It was still not an easy proposition for CSK as they needed 70 from the final overs.

Earlier, the 36-year-old Dhawan struck his second fifty of the season and anchored the Punjab innings. He combined with Sri Lankan Bhanuka Rajapaksa (42) for a 110-run stand for the second wicket from 11.3 overs after captain Mayank Agarwal's early dismissal.

Dhawan went past his earlier highest score this season -- 70 against Mumbai Indians in Pune.

Dhawan got an able ally in Rajapaksa who made 42 from 32 balls with the help of two fours and as many sixes as the duo frustrated the CSK bowlers for a long stretch in the innings.

Englishman Liam Livingstone, who was bought for Rs 11.5 crore in the IPL auction, played a little cameo of 19 runs off seven balls with the help of a four and two sixes towards the end to swell the Punjab total.

Punjab made a slow start after being sent in to bat and their captain Agarwal's struggles this season continued as he was out in the sixth over for 18 off 21 balls. They reached 37 for 1 after powerplay overs.

Dhawan and Rajapaksa kept the scoreboard ticking with singles and doubles though without too many boundaries. The duo took Punjab to 72 for 1 at the halfway mark.

The advantage for Punjab was that they lost just one wicket in the first half of their innings and they capitalised on that later in the back-end.

They added 64 runs in the final five overs. PTI