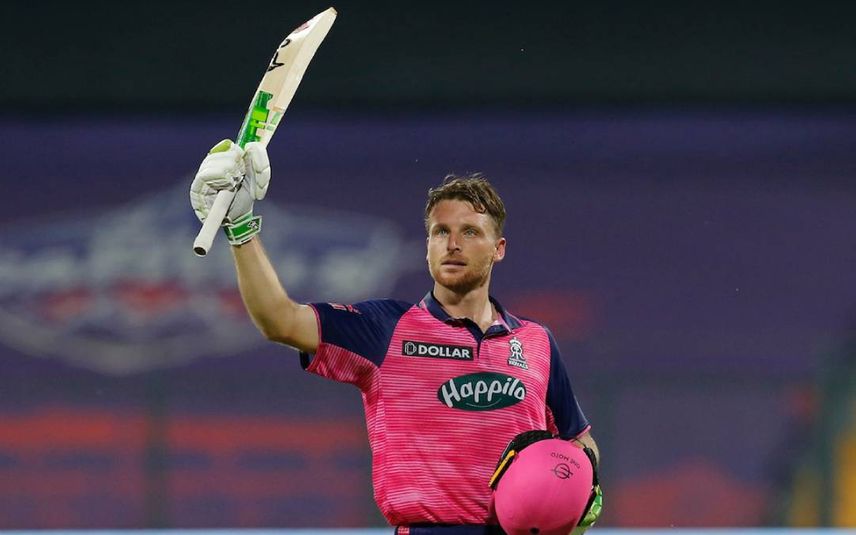 Mumbai : Jos Buttler's 116-run knock helped and Prasidh Krishna's three-wicket haul helped Rajasthan Royals beat Delhi Capitals by 15 runs in a high-scoring match at the Wankhede Stadium here on Friday. With this win, the inaugural champions go to the top of the points table with five wins in seven matches.

Chasing a mammoth 223-run target David Warner and Prithvi Shaw gave Delhi capitals a flying start but the 43-run partnership was broken by pacer Prasidh Krishna who dismissed the dangerous Warner for 28 off 14 balls, caught behind by wicket-keeper Sanju Samson in the fifth over.

In the next over, Ravichandran Ashwin was introduced into the attack and the experienced off-spinner dismissed Sarfaraz Khan in his very first ball to leave Delhi in a spot of bother at 48/2 in 5.1 overs.

Captain Rishabh Pant joined Shaw at the other end and the duo scored runs at a brisk pace. The 51-run partnership was broken by Ashwin who took his second wicket of the match dismissing Shaw who got out scoring 37 from 27 balls as Delhi lost their third wicket for 99.

Lalit Yadav then joined captain Pant and the duo tried to keep pace with the required net run rate. Prasidh Krishna struck for the second time dismissing dangerous Pant for 44 off 24 balls. In the next over Yuzvendra Chahal cleaned up Axar Patel for 1 as DC lost half of their side for 127 in 13 overs.

Lalit Yadav and Shardul Thakur then struck a partnership to take the team's total beyond the 150-run mark but the 30-run partnership was broken as Thakur was run-out and Delhi lost its sixth wicket for 157.

Lalit Yadav and Rovman Powell kept Delhi in the game but Prasidh Krishna struck for the third time dismissing the dangerous-looking Yadav for 24-ball 37, caught behind by keeper Samson as Delhi lost its seventh wicket for 187.

With 36 runs needed in the last six balls for Delhi Capitals, Rovman Powell hit six of the first ball of the over to left-arm pacer Obed McCoy. In the second ball, Powell hit a six again. In the third ball, he again hit a full toss ball for a maximum and that full toss according to Delhi Capitals captain Rishabh Pant and team management was a no-ball.

All this also broke Powell's momentum as he failed to connect the next ball. McCoy dismissed Powell in the last ball of the match for 36 runs off 15 balls as the Royals won the match by 15 runs. With this win, Rajasthan jumped to the number one spot in the points table with five wins in seven matches.

Earlier in the day being put in to bat Rajasthan Royals team got off to a great start as openers Jos Buttler and Devdutt Padikkal played a bit cautiously and ensured that there was no damage done by Delhi Capital bowlers as the inaugural champions scored 44 runs in the first six overs of Powerplay.

In the seventh, over of the innings, the Buttler-Padikkal duo took the team's total beyond the 50-run mark. After that Buttler pressed the accelerator and started hitting boundaries and sixes to notch up his half-century in just 36 balls.

In the 11th over, the Buttler-Padikkal duo struck a century partnership as Rajasthan Royals looked set for a massive total. Padikkal too went on to score his half-century scoring it in just 31-balls.

Buttler went on to score his century in 57 balls, his third of the season, becoming only the second batter in the history of IPL to score three centuries in one season after Virat Kohli who scored four tons in the 2016 season.

Captain Sanju Samson walked in to bat - his 100th match for Rajasthan Royals - and he also went on to notch up over 5000 runs in T20s. Buttler-Samson took their team's total beyond the 200-run mark in 18.4 overs. Mustafizur Rahman finally dismissed Buttler for 116 hitting nine fours and nine sixes as Rajasthan lost their second wicket of the match for 202.

Some lusty hitting by captain Sanju Samson helped his team notch up 222/2 in 20 overs. Samson scored an unbeaten 46 off 19 balls hitting five fours and three sixes.