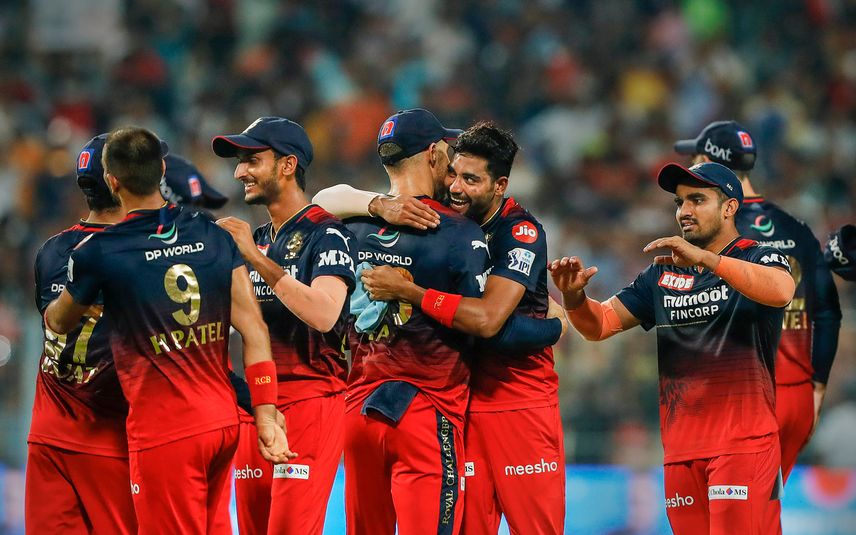 Kolkata: Rajat Patidar was the unlikely hero as he hammered a magnificent hundred on Wednesday to help Royal Challengers Bangalore edge out Lucknow Super Giants by 14 runs and move within one win of the Indian Premier League final.

Patidar, who was only drafted into the side midway through the tournament as an injury replacement, smashed 112 not out off 54 deliveries in the eliminator match.

Faf du Plessis' Bangalore will next face Rajasthan Royals in Friday's second qualifier in Ahmedabad, with the winners to take on Gujarat Titans for the title on Sunday at the same venue.

"The wicket was pretty good and I played some good shots," said Patidar. "I never feel any pressure as I think I have the ability to make up for the dots."

RCB had lost at this stage in each of the past two seasons and are still to lift the IPL trophy, having also finished runners-up three times.

The 28-year-old Patidar struck 12 fours and seven sixes to lead Bangalore to a total of 207 for four against Lucknow, one of two new franchises in this year's tournament alongside Gujarat.

Lucknow skipper K.L Rahul made 79 but was dismissed by Josh Hazlewood in the penultimate over, with 28 still needed, as they finished on 193-6.

But Patidar took the attack to the RCB bowlers and brought up his first T20 century, from just 49 balls, with a six.

In-form wicketkeeper Dinesh Karthik provided him with crucial support, making a brisk 37 not out as the pair put on 92 in only 6.5 overs.

Lucknow lost Quinton de Kock in the first over of their reply, caught at mid-on by Du Plessis off Mohammed Siraj for six.

Manan Vohra came and went for 19 off 11 deliveries.

But Rahul and Deepak Hooda eased through the gears in compiling a 96-run third-wicket partnership.

Hooda hit four sixes and one four in his 45 before he was clean bowled by Sri Lankan spinner Wanindu Hasaranga.

Lucknow needed 41 runs from the final three overs, with Rahul still at the crease.

But Australian Hazlewood took wickets with successive deliveries in the 19th over to all but seal victory for Bangalore.

Rahul tried to scoop Hazlewood but was taken brilliantly by Shahbaz Ahmed at short fine leg, quickly followed by Krunal Pandya, who was caught and bowled.

Dushmantha Chameera hit a massive six off Harshal Patel's third delivery in the final over but Lucknow came up short.

Hazlewood ended with figures of 3-43.