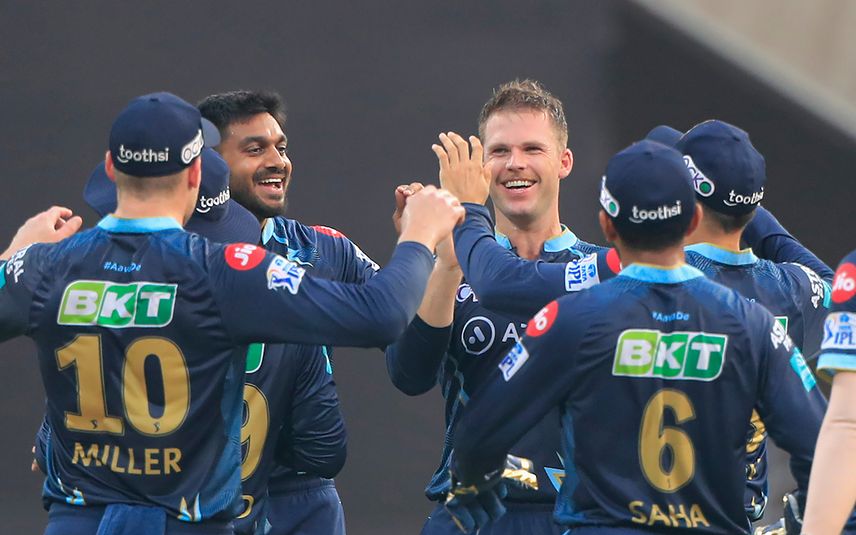 Mumbai: Andre Russell's pyrotechnics proved to be too little too late in the end as Gujarat Titans defended a small total to clinch a dramatic eight-run win over Kolkata Knight Riders in an IPL thriller here on Saturday.

With 12 points already in its kitty, the Titans are looking good for a play-off berth in its inception year.

KKR's top and middle order batters failed miserably in the wake of a clinical bowling display from the Titans with only Rinku Singh scoring 35 and it was left to Russell (48 off 25 balls) to go for a win and the West Indian nearly did it only to fail in the last over.

Chasing 157 for a win, KKR ended their innings at 148 for 8 after Russell was out in the second ball of the final over.He hit one four and six sixes.

Needing 18 from the final over bowled by Alzarri Joseph, Russell hit the first ball for a six before Lockie Ferguson took a fine catch in the deep under pressure from the vey next delivery to end KKR's hopes.

This was Titan's sixth win in seven matches and they strengthened their position at the top of table while KKR slumped to their fourth straight loss.

For the Titans, Mohammed Shami, Rashid Khan and yash Dayal took two wickets apiece while Alzarri Joseph and Lockei Ferguson got one each.

Veteran India pacer Shami wreaked havoc in his first spell of two overs, taking the wickets of new opening pair of Sam Billings (4) and Sunil Narine (5) to reduce KKR to 2/10 in the third over.

KKR's decision to promote Billings to open the innings backfired while Narine failed for the second time at the top of the order.

To make matters worse for KKR, Nitish Rana (2) edged a beautiful delivery from Lockie Ferguson to Wriddhiman Saha to continue his struggle for form this season.

Captain Shreyas Iyer, fresh from a fine 85 against Rajasthan Royals, looked in top form with an exquisite six off Ferguson as KKR reached 34 for 3 at the end of powerplay.

But, KKR suffered their biggest jolt with Iyer edging an angled delivery from pacer Yash Dayal in the first ball after powerplay, that left them a huge mountain to climb in their run chase.

Russell got a life after he holed out to fine leg fielder but Dayal overstepped for a no-ball. Russell made the reprieve count with two successive sixes off the same bowler.

KKR knew they were still in the game as long as Russell was there and the West Indian survived two close calls to keep his side in the hunt only to get dismissed in the last over.

Earlier, captain Hardik Pandya's third fifty of the season was the lone saving grace in Gujarat Titans' underwhelming batting show as they scored a below-par 156 for 9.

The Titans skipper missed the last game as a precautionary measure and looked a bit rusty even as he scored 67 off 49 balls with four boundaries and two sixes.

KKR bowled as many as 43 dot balls and were brilliant at the death as they conceded only 29 runs and took as many as seven wickets in the final five overs.

Andre Russell (4/5 in 1 over) got four wickets in the final over as Rinku Singh was a livewire in the field with four catches.

While Shubman Gill (5) was out early as Sam Billings collected a faint tickle down the leg-side off Southee's delivery, Wriddhiman Saha (25 off 25 balls), for the second match in succession, piled on the pressure, consuming too many dot balls.

However, an early breakthrough didn't stop Pandya from playing his natural, aggressive game as there was no marks for guessing as to who dominated their 75-run stand for second wicket stand.

David Miller (27 off 20 balls, 2x6), after a match-winning knock against CSK the other night, gave his skipper some support in a 50-run third wicket stand but there wasn't a lot of resistance from other batters.