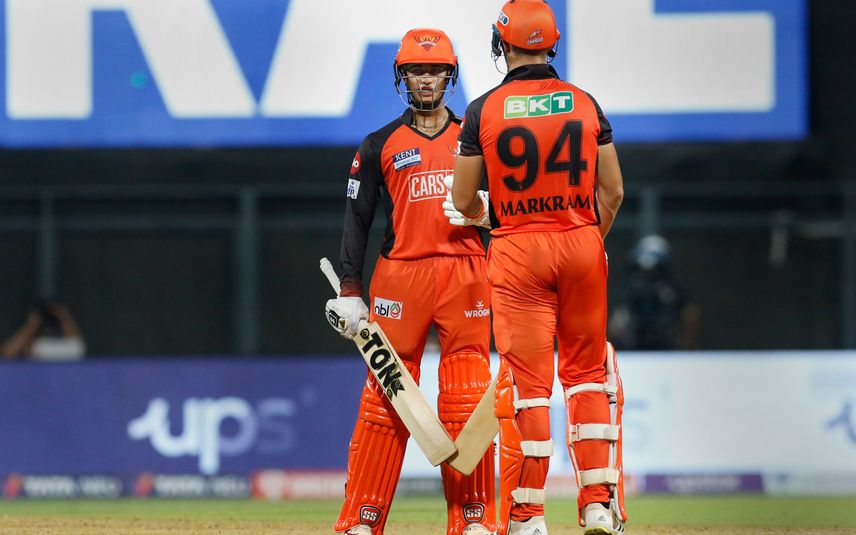 Abhishek blazed away to 65 off 42 deliveries, while Markram made a 40-ball 56 during a third-wicket stand of 96 runs.

Then, Shashank Singh (25 off 6 balls) smashed Lockie Ferguson (0/52 in 4 overs) for three successive sixes to score 25 runs in the innings' final over.

To start with, SRH were helped by Mohammed Shami's (3/39 in 4 overs) 11-run opening over in which a first-ball beauty was followed by five leg-side wides, not once but twice.

Yash Dayal too conceded 11 runs, thanks to two boundaries by Abhishek Sharma on the off side, as SRH raced to 22 for no loss in two overs.

Kane Williamson clipped Shami over square leg for his first boundary but that's all the SRH skipper could do with the bat as, three balls later, the seasoned India pacer went through the gate with a lovely seaming delivery to dismiss the Kiwi and give his team the match's first breakthrough.

Having got a life at point even before he could open his account, Rahul Tripathi smashed Shami for 6, 4, 4 before a review found that the batter was trapped in front of the wicket in an eventful fifth over, which went for 14 runs.

Unperturbed by the fall of two wickets, Abhishek collected two successive fours off Alzarri Joseph -- first he lofted over the infield and then found the gap through a packed off-side -- to help SRH score 53 runs in the six power play overs at the Wankhede Stadium.

SRH needed a partnership at that stage and the duo of Abhishek and Markram not just provided them that but also kept the scoreboard moving at a very good rate by regularly finding the boundaries.

While Markram dealt with the likes of pacers such as Alzarri, Abhishek went after Rashid Khan, hitting the Afghanistan spin ace for his third six to reach his half-century in style.

Against Rashid, Abhishek was particularly strong on the on-side, getting his three sixes over long-on and deep mid-wicket.

However, the 21-year-old's fine innings came to an end when he inside-edged a slower delivery from Alzarri in the first ball of the 16th over.

Shami came back to dismiss the big-hitting Nicholas Pooran (3) cheaply before Markram got to his fifty by pulling the bowler for a six over deep mid-wicket. Stationed in the deep, Rashid's day in the field got worse as he misjudged it. PTI