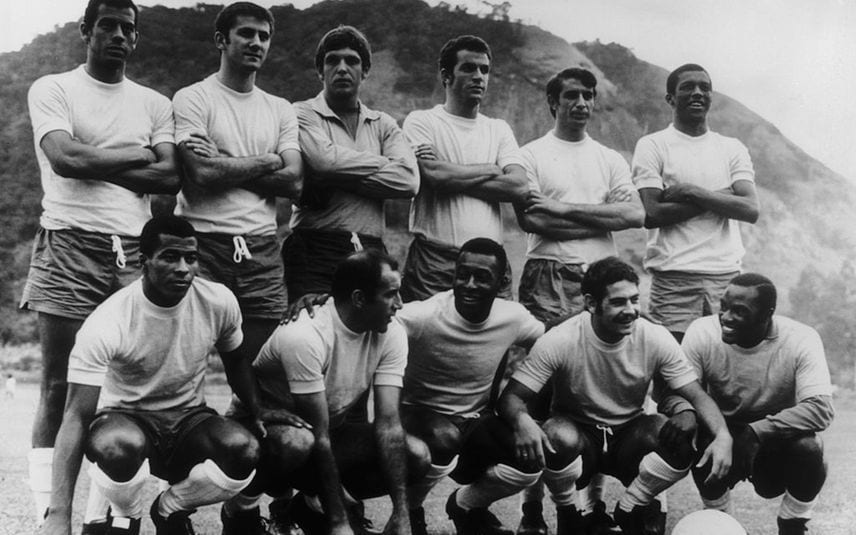 World Cup reminds us of mesmerising moments from the past, of great players and great teams, exhibiting magic that spans seconds, yet creates smile for some and tears for others. That is the beauty of World Cup football.

The 1970 FIFA World Cup in Mexico reminds fans of the final puzzle to Brazil's triumphs in the 1958 and 1962 World Cups. A team that echoed "the beautiful game" with its attacking solidarity, uniqueness, exuberant self-expression and style.

Edson Arantes do Nascimento, commonly known as Pelé, the creative, goal-scoring genius, once again thrilled the fans, adorned in yellow colour. He stood with a star-studded side comprising of Roberto Rivellino with his thunderous left foot, the quick forward Tostao, Jairzhino, the successor to the Garrincha in the wing, the Middlefield duo of Clodoaldo-Gerson and a defence comprising of Carlos Alberto, Wilson Piazza, Brito and Everaldo.

For millions of fans back home, the 1970 World Cup was the platform to reaffirm their place on the centre stage of world football after a disappointing outing in 1966. The World Cup in England showed how other teams were ready to use physical force to silence the high-flying Pele.

Him suffering an injury in the tournament was the key reason behind Brazil's elimination in the first round -- after playing only three matches. Pele faced physical football, with Bulgarian and Portuguese defenders repeatedly fouling him, eventually leading to his injury against Portugal. However, things changed four years later, and the 29-year-old, rumoured to be playing his last World Cup, demonstrated sheer determination in changing his approach to the game and scripting a new history.

Despite missing WC-winning veterans like Garrincha, Nilton Santos, Valdir Pereira, and others, Brazil started the group stage matches by defeating Czechoslovakia 4-1, with Jairzinho scoring twice, Pelé and Rivelino claiming the other two. Brazil edged past England in the next match, thanks to the goal from Jairzinho, assisted by Tostao. Pele scored twice against Romania, which included a 20-yard bending free-kick and helped his side win the match 3-2.

In the quarter-final against Peru, Rivelino scored in the early minutes, assisted by Pele, and Tostao added another by the end of the first half. However, Peru rallied and scored twice, leading to goals from Tostao and Jairzinho, ending with a 4-2 scoreline.

In the semis, Brazil met the tough Uruguayan side, the first time these two teams were meeting after facing off in the 1950 World Cup final round. The match was most memorable for Pele narrowly missing an open goal despite fooling Uruguay keeper Mazurkiewicz through a dummy move.
However, it was Uruguay which went ahead in the 18th minute through Cubilla but just before half-time, Clodoaldo equalised, and Jairzinho gave Brazil the lead, followed by Rivelino scoring another in the last 15 minutes.

Italy was Brazil's opponent in the final played in Aztec Stadium. Earlier, Italy got past West Germany in a thrilling semi-final encounter that went to the last whistle. The Italians eliminated West Germany 4-3 in extra time through a goal from Gianni Rivera.

Italy had earlier defeated Brazil in the 1938 World Cup semis, by a 2-1 scoreline. Both teams, as two-time winners of the Jules Rimet trophy, were playing to keep the trophy outright. The playing styles of the two finalists were very different. As always, Italy drew much of its inspiration from the tactics they planned to face a team of Pele. Both teams played contrasting football, with the South Americans deploying a high-pressing attacking football and the Italians willing to sit back and take chances through counter-attacks.

Italy parked the bus, with Brazil edging closer to the goal as minutes went past in the first half of the game. In the 18th minute, Pele found the back of the net through a header from Rivelino's cross. However, Italy bounced back after Brazil's defensive error, and Roberto Boninseyna nipped in and scored.

Brazil put pressure on the Italian defence, often finding spaces through the middle, and relying on crosses. In the 65th minute, Brazil went ahead through a long-range effort from Gerson. Brazil found third from the freekick of Gerson after the ball was headed onto the path of Jairzinho by Pele. Brazil found their fourth goal after Pele flicked the ball coolly into the path of his skipper Skipper Carlos Alberto in the right wing, who in turn unleashed a rocket past the Italian goalkeeper. It was too late for Italy to come back and with a 4-1 scoreline, Brazil lifted their third World Cup, surpassing Italy and Uruguay. Brazilian coach Mário Zagallo became the first footballer to become a World Cup champion as a player (1958, 1962) and coach. For Pele, it was his final international appearance in the World Cup. Yet he became the first (and so far only) to win the ultimate prize three times.