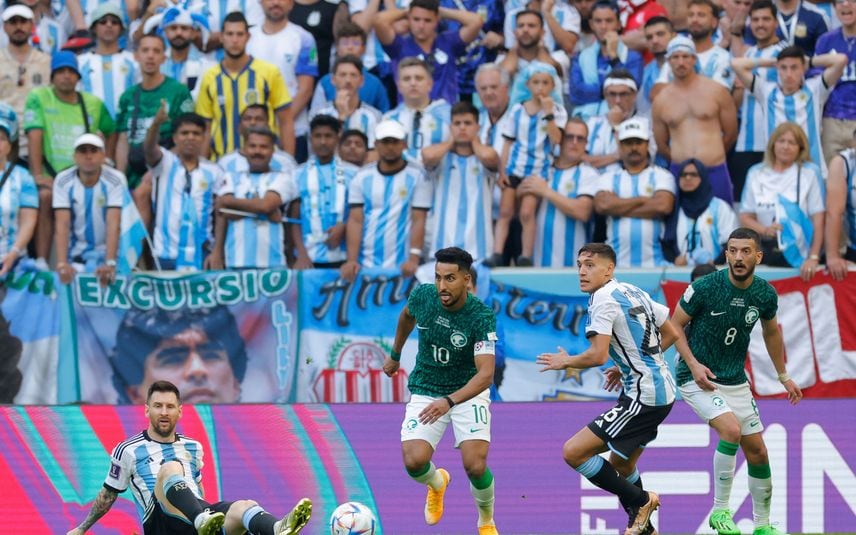 Messi was disappointed, and Argentina fans could not comprehend what happened in Lusail Stadium in Doha on Tuesday. In one of the major upsets in tournament history, a 51-ranked team, Saudi Arabia, beat Argentina 2-1 in their opening fixture. After going ahead through Lionel Messi in the 9th minute, the South American was predicted to win the match without any effort. However, something happened after half-time.

Lusail stadium was buzzing with travelling Argentina fans, not to mention fellow fans from across the globe. Argentina started the game in the backdrop of this atmosphere, basking in its warmth, as Messi, Lautaro Martínez, and Di Maria, all found a shot on target in the opening minutes of the first half. Messi's shot on goal in the third minute showed how solid they started the game. Saudi with a defensive back four and playing a 4-1-4-1 formation had little to offer other than to stop Messi and Martinez from running past their high line. It was suicidal to play a high line unless the team was looking to counter-press the opposition. However, Saudi was largely casual in its offensive moves but succeeded in keeping Argentina's attack at bay.

Interestingly, the match also saw Argentina falling for the off-side traps and getting three goals disallowed. Fortunately, an unnecessary foul inside the penalty box gifted Argentina the golden opportunity to find the opener through a penalty. Messi didn't panic, and Argentina opened their account in Qatar.

However, things changed when the team returned to play in the second half. Instead of playing in the middle, Saudi started to press Argentina's back line, with the defensive midfielder Abdulelah Almalki coming to play more in the offensive department. They spread the play, leading to Argentina becoming more vulnerable down the middle.

Within minutes, Al-Shehri ran onto a touch from Feras Al-Brikan, beat Cristian Romero on the outside and slotted the ball back across goalkeeper Emiliano Martinez and into the far corner. Argentina was shocked, and the body language of Romero, who was substituted later, told how disappointed they were.

The Argentines were rattled, and five minutes later, the turnaround was complete. Al-Dawsari's clever turn in the box beat two defenders before he shifted the ball past a third and rifled an unstoppable shot into the top far corner.

Saudi coach Herve Renard had a plan, and he executed it to perfection.