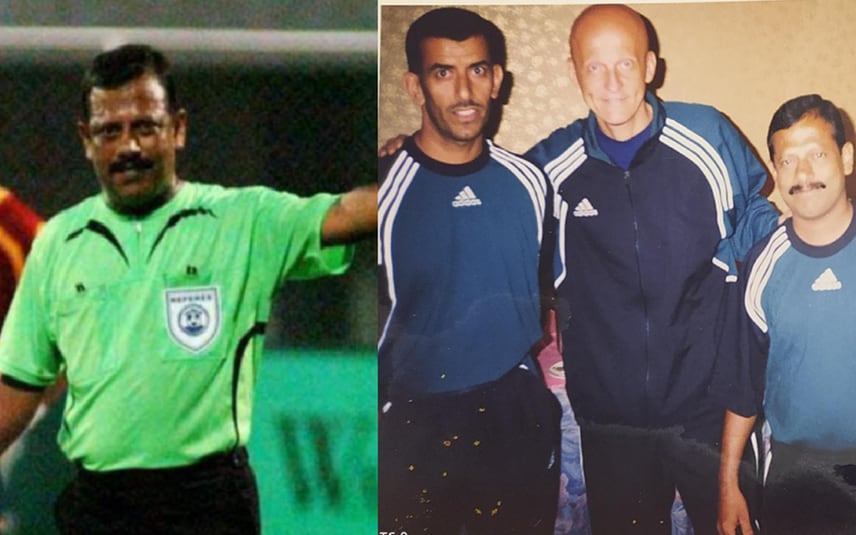 Each time when the World Cup football approaches the new millennium, there is one Indian whose mind is flooded with mixed feelings, not just excitement as any football lover would exhibit. Komaleeswaran Sankar is the name, and he happens to be the only Indian to date to have officiated in a World Cup, something that would remain a dream for many. An assistant referee, Sankar, who hails from Chennai did duty in the 2002 edition which was jointly hosted by Japan and Korea. His role was in Japan, where he got to officiate in three matches --- Croatia vs Mexico, Belgium vs Russia and Belgium vs Tunisia. Mingling with some of the biggest names in world refereeing, like Pierluigi Collina of Italy and Kim Milton Nielson of Denmark, among others, was the kind of highlight he preserves close to his heart. “It was an experience of a lifetime. They proved to me why they are considered giants in the profession, and certainly, I believe I could learn a lot from them,” believes Sankar as he goes into a reminiscent mode. But why the ‘mixed feelings’ then, one wondered.

Sankar believed he had been given the nod for another World Cup, the very next edition in 2006 in Germany. The way he was encouraged and advised to be ready for the big occasion was a clear indicator, as he did prior to the 2002 World cup going into his own drill to keep himself super fit and ready. Only, as he was to lament, even after his visa and other things were in the processing stage, he got the dramatic message that he need not travel but stay back! No reasons were given, and to date, he continues to ruminate on how this had come about. Time has flown, and Sankar has himself retired from refereeing, but this one thought keeps nagging him along with, of course, the exciting experience of 2002 WC that remains etched in his memory.

An Asian Football Confederation (AFC) referees’ instructor now, Sankar was in Jakarta when that horrific tragedy occurred in Kanjuruhan stadium in Malang, leaving around 125 people dead and many injured. Sankar had gone in connection with the AFC -U 17 tournament, and when the tragedy occurred he was in another stadium close to Kanjuruhan. Quite shaken by what happened, the Chennai official felt several things went wrong there even though from what he learnt, all steps had been taken for this needle match of two rival teams. From what he understood, police used tear gas which was against FIFA's stipulation, and that triggered this sad moment. The effect of this, he said, was that the AFC event was held without any spectators and in general football activity in the country temporarily ground to a halt.

Like all football lovers, Sankar too regretted that such a calamity should have happened and that too when everyone was keenly looking ahead to the biggest excitement of all the Qatar World Cup to unfold in a little over a month’s time in Doha. Yes, the thought of a world Cup brings to his mind his best moments as a Referee! The kind of prior preparations he did and the actual moment with a flag and a whistle in hand at the Niigata stadium all set for the Croatia-Mexico match --- everything is fresh in his mind. A touch is nervous to start with, as he said, considering the surcharged stadium ambience but settled down fast to what is more, help the main referee (Jun Lu of China) come up with the first Red Card incident of the 2002 World Cup! Overall, his tenure in the World Cup went off well, and as Sankar said, he also did not miss watching other matches when off duty. What was the one major difference he saw officiating in an event of this magnitude Sankar was clear, it had to be the swiftness of action, speedy movements and, of course, high fitness levels of players.

Four editions of the World Cup have passed by since his maiden effort in 2002, and how much has changed in the field of refereeing? Sankar believes refereeing today is very much technology-driven. Video assistance has come in increasingly. From the phase after 2006 when the central trio (main referee and two assistant referees) had to be from the same country, now referees have to take the Video Assistant Referee’s help to correct or justify the on-field verdicts. At times to further clear the air of any possible error, the on-field referee can utilise the monitor set up on the side of the pitch as well. All this had come into play at the 2018 World Cup in Russia. Now in Doha, Sankar said there is to be further advanced.

FIFA plans to introduce what they call ‘Robo linesmen’ where ten cameras would be in action to particularly check off-side calls. This had been tested at the previous FIFA World Club championship. The effort, he said, was to ensure human error came down to the minimum in an event of such high magnitude and with so much at stake.

Considering all these developments and with India far behind in the implementation of the latest technological implements, Indian Referees suffer in comparison to their counterparts in other developed worlds. That is why Sankar fears it would be a long time before another refereeing official from India was to make an appearance again in a world cup.
Finally, who was his favourite in the World Cup? Brazil is his choice, but these are times, he said, when there was little to talk of Latin American style, considering most top players hone their skills in European leagues and thus get adapted to that patterns. In 2002 when he was present, it was Brazil that won finally. That country has not succeeded since. Will 2022 bring the glory back? Sankar would want that!