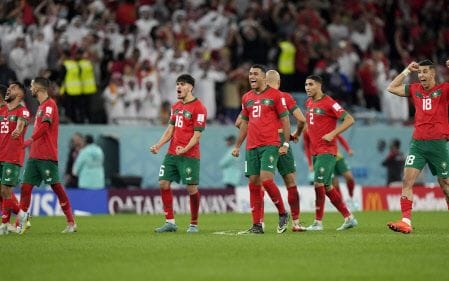 Doha: Morocco progressed to the quarter-finals of the World Cup in Qatar courtesy of a penalty-shootout victory over Spain at Education City Stadium on Tuesday.

The two teams could not be separated during the 90 minutes, but penalties from Abdelhamid Sabiri, Hakim Ziyech, Achraf Hakimi and Mario Pašalić proved enough for Morocco to win 3-0 in the shootout, with Pablo Sarabia, Carlos Solar, Sergio Busquets missing for Spain. It was the goalkeeper Yassine Bounou who took most of the acclaim from the jubilant Morocco team after the shootout.

The round of 16 match of the World Cup between Morocco and Spain remained goalless at the end of regular time. Spain goalkeeper Unai Simón made a vital save in injury time to deny Walid Cheddira from scoring for Morocco. On the other end, Sarabia's shot struck the woodwork from a dangerous cross into the box in the last seconds of the match. Despite holding more than 70 per cent of possession, Spain struggled in the final third favouring Morocco to punish them through swift counter-attacks. After 120 minutes of play, the match came down to penalties.

Pablo Sarabia, Carlos Soler and Sergio Busquets missed their penalties for Spain, with Sarabia hitting the post and Morocco goalkeeper Yassine Bounou stopping the other two. Morocco has been the biggest surprise of the tournament and will next face either Portugal or Switzerland. Morocco is the only team from outside Europe or South America to make it to the last eight. It is the only Arab — and African — nation left in the tournament.

In the first half, Spain dominated the possession while Morocco happily sat back and denied the 2010 World Champions space in the middle of the park. Interestingly, Gavi became the youngest player (18 years 123 days) since Pele (17 years 249 days) in 1958 WC to start a knockout stage game in World Cup.

The first meaningful chance in the half came from a free-kick in the 12th minute. However, Achraf Hakimi's strike went over the bar, with keeper Unai Simón tracking it all the way.

Dani Olmo created the first chance for Spain as he hit on target from the free kick but Bono saw that the ball didn't let the ball find the back of the net. Spain upped the ante by pushing forward in the hope of a goal but the resolute Moroccan defence stood like a wall to deny the Spanish team the lead.

Morocco had a clear game plan to deny Spain from playing their style of play. Hakim Ziyech and Achraf Hakimi looked omnipresent on the right side of the pitch to give a headache for the Spanish defence, especially Jordi Alba.

Spain nearly opened up the play from a long ball from Jordi Alba on the left in the 25th minute. However, Marco Asensio's shot from the tight angle only hit the side netting. On the other end, a long-range strike from Noussair Mazraoui was safely brought under control by Spanish goalkeeper Simon.

Morocco nearly went ahead in the 42nd minute after Boufal sent a cross to Aguerd in the box from the left. However, Aguerd's header missed the target.

In the second half, Morocco nearly took the lead in the 49th minute after the Spanish keeper was placed under pressure by En-Nesyri and Ziyech from a dangerous back pass from his defenders. Though Morocco looked sharp in counterattacks, Spain maintained control of the game.

Spain registered its first shot on target in the 55th minute after Asensio played a free-kick short, only to be punched away by keeper Yassine Bounou to safety.

Both teams struggled to create any clear-cut chances as minutes dragged on in the second half.

In the 81st minute, Alvaro Morata sent a dangerous ball across the face of the goal. However, nobody was in the box to nick the ball into the back of the net. On the other end, Morocco created a rare opportunity to punish Spain in the 85th minute after Hakimi sent a dangerous cross from the right and fell into the middle of the box for Cheddira to find the opener. However, Cheddira's strike was saved comfortably by Simon.

Minutes later, Morata missed a header from a freekick. Yassine Bounou came to the rescue of Morocco in the final minutes of the injury time to push away a free kick from Pedri.