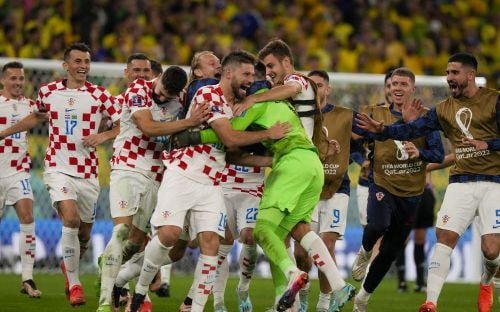 Doha: Croatia advanced to the semifinals of the FIFA World Cup 2022 after beating Brazil 4-2 on penalties at Education City Stadium on Friday. The match finished 1-1 after extra time, with Bruno Petkovic cancelling out Neymar's brilliant solo opener.

The two teams could not be separated after the extra time, but penalties from Nikola Vlasic, Luka Modric, Lovro Majer and Mislav Orsic proved enough for Croatia to win 4-2 in the shootout, with Rodrygo and Marquinhos missing for Brazil. It was the goalkeeper Dominik Livaković who took most of the acclaim from the jubilant Croatia team after the shootout.

In the extra time, Croatia came back one goal down to equalise against Brazil through substitute Bruno Petkovic minutes after Latin-Americans took the lead through Neymar. However, the match came to penalties as both teams failed to break the deadlock.

The heroics of goalkeeper Dominik Livaković denied Brazil from scoring against Croatia in the regular time. However, Neymar came to the rescue of Brazil in the extra time after he played a one-two with Paqueta just outside the box before rounding the keeper and scoring the opener. Neymar’s goal moved him into a tie with Pelé as Brazil’s all-time leading scorer with 77 goals. When everything seemed lost for Croatia, substitute Petkovic scored the equaliser in the 117th minute of extra time from a brilliant counter-attacking football.

The first half of the quarter-final match between Brazil and Croatia in the World Cup remained goalless after Latin Americans struggled against a well-drilled Croatian side. However, they came to life in the second half by creating several chances. However, Croatian goalkeeper Dominik Livaković made nine saves to deny Latin Americans from opening the scoring at the end of regular time.

Brazil was the first to register a shot on target in the 5th minute after Vinicius sent a curling shot from 25 yards out. However, Croatian goalkeeper Dominik Livaković made no mistake by diving down to gather the loosely hit shot. While Croatia looked incredibly good defending in the early minutes, Brazil looked stunning on counters. However, Croatia came to life in the later stages of the match, with Luka Modric and Mateo Kovačić dominating the Brazilian counterparts Casemiro and Lucas Paqueta.

Ivan Perisic missed a golden opportunity to find the opener for Croatia in the 12th minute after Pasalic sent a dangerous cross from the right into the box for Perisic. However, he missed connecting the ball on time. Brazil looked uncomfortable with the high pressing of Croatia and misplaced passes in the middle of the park.

On the other end, Brazil managed to go ahead through Vinícius Júnior and Neymar in the 21st minute. However, Croatia kept bodies inside the box to deny Brazil from taking a clean strike on target. Brazil held the majority of possession when Croatia looked happy to attack through transitions. Both teams also ended up with several fouls.

Brazil started the second half strong by creating two superb chances. In the 47th minute, Livaković prevented defender Gvardiol from scoring an own goal while trying to clear a dangerous low cross from Militao from the right flank. Minutes later, Gvardiol came to the rescue of Croatia by blocking Neymar's strike on goal. Brazil's call for a penalty was flagged off-side by the referee after checking with the VAR.

Neymar nearly scored his record-setting goal in the 55th minute after Richarlison sent Neymar down the inside channel. However, the strike from Neymar was stopped by Livakovic inches away from the goal.

Livakovic came to the rescue of Croatia in the 66th minute after Paqueta found himself with a loose ball inside the box and managed a shot on target. However, his strike was blocked by the Croatian goalkeeper in front of the goal.

Brazil created several chances in the later stages of the second half. However, between the Latin Americans and the goal was a brilliant defensive wall and an in-form goalkeeper.

Brazil looked to create several chances in the extra time but was denied by the deep defensive line of Croatia inside the box. On the other hand, Croatia missed a golden opportunity in injury time after making a rare counter-attacking run through the right wing. However, it was Brazil that went 1-0 ahead in the first half of the injury time through Neymar after he collected the ball on the edge of the box and played a one-two with Paqueta before getting past the defenders, and opening the scoring. Brazil's ecstasy was short-lived after Bruno Petkovic levelled the scoring for Croatia through a break, and Orsic played a simple ball across the box for the striker to finish.

Brazil coach Tite has named an unchanged starting line-up for Friday's World Cup quarter-final against Croatia at Education City Stadium in Qatar. Additionally, Neymar retains his place in the starting line-up following his return from an ankle injury in the previous round.