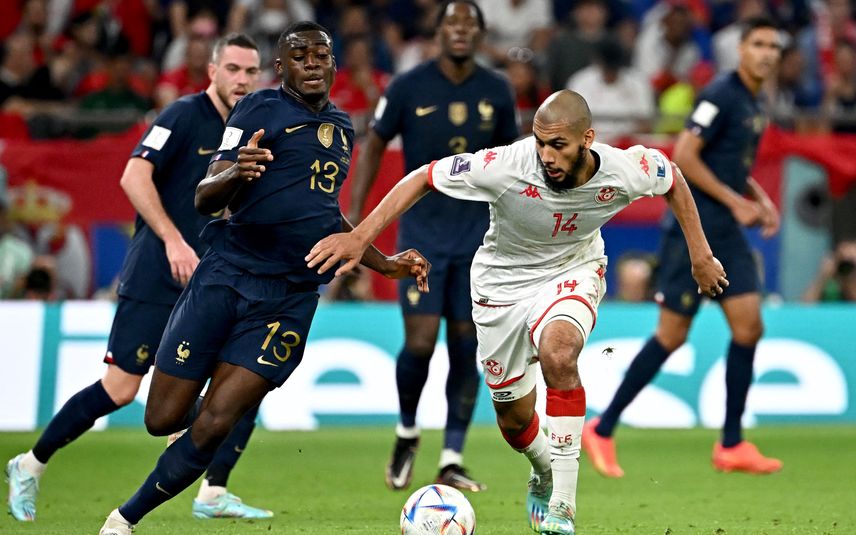 It is Australia's first time in the knockout stage since 2006, the only other time they advanced out of the group stage. Leckie took a pass just around the center circle and moved in and around a Danish defender, eventually lacing a left-footed shot that beat goalkeeper Kasper Schmeichel diving to his left. Australia finished with six points in Group D.

The World Cup proved to be a major disappointment for Denmark after reaching the semifinals in the 2020 European Championship. They slogged through a 0-0 draw in their opening match with Tunisia and then recovered in a 2-1 loss against France. The Danes attacked from the start against Australia but could never break through with the Socceroos.

For Tunisia, Wahbi Khazri scored the opener in the 58th minute after Fofana lost the ball in midfield, letting the Tunisian captain collect the ball and dribble past several French players to place the ball past the French goalkeeper. Meanwhile, Antoine Griezmann's last-minute goal was ruled out as offside.

The match between the two attacking teams remained goalless at the end of the first half. Veteran goalkeeper Steve Mandanda was called into action minutes into the match. Tunisia nearly went ahead in the 8th minute after Ghandri flicks the ball beyond Mandanda from Khazri's free-kick, but it turned out to be offside.

However, France managed to keep their solid defence intact, despite several key figures rested for the match. They came to life in the later parts of the first half through wonderful counter-attacking football. In the 25th minute, Kingsley Coman received the golden opportunity to score past the goalkeeper after Fofana played a pass right into the penalty box. However, his shot went agonisingly wide and braced side netting. Minutes later, Tunisia again threatened the French Goalkeeper after Anis Ben Slimane fired a screamer on target from outside the box in the 30th minute.

Tunisians continued to create threatening movements in the French box. Varane's half clearance in the 36th minute was volleyed back at goal by Khazri. However, Mandanda was there to stop the ball. Wahbi Khazri's right-footed shot in the 45th minute from outside the box went high over the bar.

Despite the limited chances created, Tunisia was able to hurt France in transition. Les Bleus seemed more than happy to sit back and wait for a chance to open the scoring.

Tunisia started the second half with the intent to find the opening goal before France brought in their star players in the later parts of the match. In the 47th minute, Tunisia's call for a penalty was dismissed by the referee after Tchouaméni attempted a sliding tackle on Khazri inside the box. Fortunately, Tchouaméni was able to get in touch with the ball. Laidouni nearly scored the opener in the 53rd minute after he won the duel with Fofana inside the box and directed a powerful shot to the goal. However, his shot went over the bar. France came back to life in the later minutes of the second half after Mbappe, Rabiot, Dembele and others were introduced to change the tide of the match. Griezmann's corner from the left was headed over the bar by Axel Disasi in the 80th minute. Tunisia was happy to sit back and let France attack in the later stages of the second half. Rabiot nearly finds France's opener in the 85th minute from a brilliant cross from the right. However, his half-volley went wide. Mbappe nearly found his fourth goal of the World Cup in the dying minutes of the match by dribbling past a bunch of defenders, but Dahmen palmed away his vicious shot.

Kylian Mbappe is among the players rested as France coach Didier Deschamps makes nine changes to his starting line-up for Wednesday's final World Cup group game against Tunisia at Education City Stadium.
Mbappe has scored three times so far in Qatar, netting once in the holders' opening 4-1 win against Australia before his brace secured a 2-1 win over Denmark on Saturday.

Raphael Varane and midfielder Aurelien Tchouameni are the only players to retain their places. There is a debut for Monaco's Axel Disasi, who is expected to start as a right-back, while Eintracht Frankfurt's Randal Kolo Muani gets a first start for his country.

France's two opening victories made them the first team to secure qualification for the last 16, and they now only require a point to clinch first place in Group D.

Even a defeat will not stop them from topping the section so long as Australia does not beat Denmark at the same time and manage to overturn France's advantage on goal difference, which is currently superior by six.

Tunisia needs to win and hope Australia does not win the other game to have a chance of going through. Their coach Jalel Kadri makes six changes to the team that lost 1-0 to Australia, including bringing in Corsican-born Wahbi Khazri as captain.