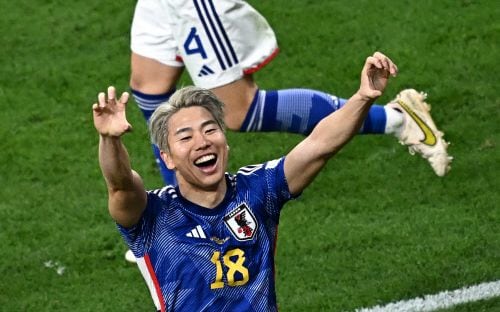 Doha: Japan came back one goal down to beat Germany 2-1 in their World Cup 2022 opener at the Khalifa International Stadium in Ar-Rayyan, Qatar, on Wednesday.

İlkay Gündoğan scored the opener from the penalty spot for Germany against Japan in the first half. However, Japan equalised through Ritsu Doan in the 73rd minute.

Minutes later, Japan took the lead through Takuma Asano in the 83rd minute to break Germany's spirit in the game. Asano received the long ball down the right and scored it past Neuer after reaching the right-hand corner of the six-yard box.

Meanwhile, goals from Japan and Germany were ruled out by VAR as off-side in the first half.

Japan stunned Germany in the 9th minute after they won the ball in the middle and unleashed a counterattack. Junya Ito curled a low cross from the right wing into the penalty box for striker Maeda, who guided the ball into the bottom left from six yards. However, the goal was chalked off by VAR for being offside.

Germany came back to life in the next minutes, with Rudiger's header from a corner hitting the side netting. Meanwhile, Japan looked to punish Germany with quick counters and unleashed movements through the right flank.

In the 20th minute, Germany nearly found the opener after Joshua Kimmich fired a shot from the edge of the box, and goalkeeper Shūichi Gonda blocked it.

19-year-old phenomenon Jamal Musiala played a crucial role in the left wing, often leading Germany's attack. He found spaces in Japan's left wing and set up the play for Havertz and Gundogen.

By the end of the first half, Germany's dominance was clearly visible across the pitch, with five shots on target from a possible 14.

In the 45th minute, Joshua Kimmich's left-footed shot from outside the box was saved by the Japanese goalkeeper in the bottom left corner. Kai Havertz's delightful finish in the dying minutes of the first half was chalked off by VAR for being off-side.

Japan started the second half strong, with great attacking football through the middle of the park. However, they couldn't test Neuer until the dying minutes of the second half.

Meanwhile, Jamal Musiala dribbled past four defenders inside the Japan box in the 51st minute, but his shot went over the bar. Japan retaliated fast and countered. However, they struggled to get past the two strong German defenders.

Gündoğan nearly scored his second goal the game after Musiala found Gundogan down the middle. However, his low shot came off the base of the right-hand post and out for a goal kick.

Japan came back to life in the later stages of the second half and created numerous chances in front of the goal. They managed to press the German defence from making mistakes in the middle.

In the 73 minutes, Japan found the equaliser through Ritsu Doan. Neuer saves Minamino shot, but the ball falls straight into the path of Doan, who slotted it home comfortably.

Minutes later, Japan took the lead through Takuma Asano in the 83rd minute to break Germany's spirit in the game. Asano received the long ball down the right and slammed it past Neuer after reaching the right-hand corner of the six-yard box.