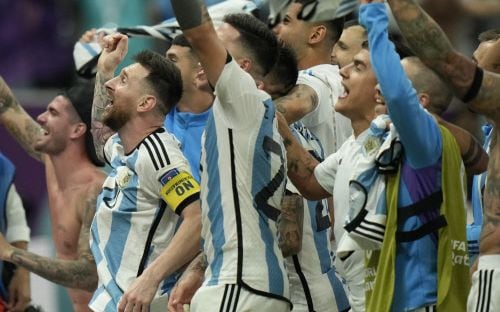 Doha: Argentina progressed to the semifinals of the World Cup in Qatar courtesy of a 4-3 penalty shootout victory over the Netherlands at the Lusail Stadium on Saturday. Earlier, the match finished 2-2 after extra time, with Wout Weghorst striking twice to cancel out goals from Nahuel Molina and Lionel Messi.

Messi converted his penalty in the shootout and Argentina goalkeeper Emiliano Martínez saved two attempts. Lautaro Martinez scored the clinching penalty. Argentina will play Croatia in the semifinals on Tuesday. Penalties from Lionel Messi, Gonzalo Montiel, Leandro Paredes, and Lautaro Martinez proved enough for Argentina to win 4-3 in the shootout, with Virgil van Dijk, and Steven Berghuis missing for the Netherlands.

Argentina took the lead through Nahuel Molina in the 34th minute, followed by Lionel Messi converting a penalty in the 73rd minute. With the goal, Messi has drawn level with Gabriel Batistuta as the joint-highest scorer for Argentina at a World Cup final. Striker Wout Weghorst scored one back in the 82nd from a brilliant header from a free-kick, and he scored his second from a free-kick on the edge of the box to equalise against Argentina.

Argentina started strong against the Netherlands in the first half after Rodrigo De Paul attempted a strike on goal from a quick counter-attacking football in the 5th minute. On the other end, Steven Bergwijn miscued a shot in the 24th minute after he made a brilliant run beside Depay and took a shot on goal. Unfortunately, he struggled to get a clean strike on the ball, and the went wide of goal.

However, Argentina took the lead through Nahuel Molina in the 34th minute after Messi sent a brilliant through ball to split open the Dutch defence. Molina played a one-two with Messi on the right before making a forward run and receiving a thrown ball from Messi inside the box. Molina made no mistake and slotted home the opener.

Argentina nearly took a two-goal lead in the 40th minute after Alvarez sent a brilliant low cross to the box for Messi. PSG striker holds off his marker before turning and firing a shot into the gloves of the Netherlands goalkeeper.

Meantime, the Netherlands won several freekicks just outside the penalty box. However, Argentina has somehow managed to clear dangers on time.

The second half started with Argentina playing on the front foot, with Messi making forward runs. In the 62nd minute, Lionel Messi nearly increased Argentina's lead with a freekick. However, Messi's strike went over the bar. The Netherlands struggled to create any significant chance on the other end.

Argentina took the lead 2-0 in the 73rd minute after Acuna was brought down inside the penalty box by Dumfries. Messi, who took the kick, comfortably beat goalkeeper Andries Noppert and sent the ball back into the net. However, the Netherlands scored one back through Wout Weghorst after they won a free kick on the far right side and sent a dangerous ball into the box for the Dutch striker to head in the goal.

Netherland came to life after going in front and nearly found the second goal through a brilliant strike from Steven Berghuis. However, his volley hit the side netting after taking a deflection.

Defender Lisandro Martinez comes into the Argentina side in place of winger Alejandro Gomez as the only change for Friday's World Cup quarter-final against the Netherlands.

Martinez will play in a back three, with Argentina coach Lionel Scaloni opting for more defensive cover against the Dutch.

Rodrigo De Paul is fit to start in midfield despite reported concerns about his hamstring, but Angel Di Maria is on the bench having missed the 2-1 victory over Australia in the last 16 following injury.

Steven Bergwijn is recalled for the Netherlands at the expense of Davy Klaassen after their 3-1 win over the USA.

Bergwijn will line up alongside Memphis Depay in attack while Cody Gakpo, who scored three times in the group stage, drops into a deeper role behind the front two.

The winner between Argentina and the Netherlands plays Croatia on Tuesday for a place in the final.