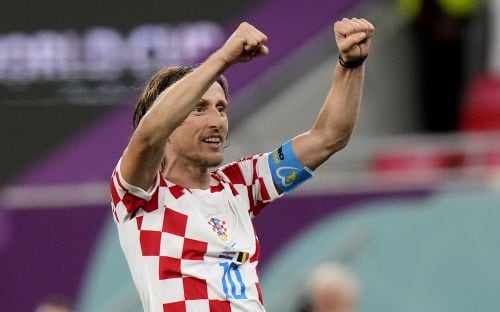 Doha: Croatia advanced to the last 16 of the World Cup on Thursday after a 0-0 draw against Belgium, whose group-stage exit will likely usher in the breakup of its talented but underachieving generation of players.

The eastern European nation has reached at least the semifinals on each of the two times it has reached the knockout stage.Belgium was eliminated after scoring one goal in three games and failed to live up to its status as the second-ranked team and one of the tournament favorites.

Meanwhile, Morocco qualified from Group F as the table topper after defeating Canada 2-1 on Thursday.

Croatia nearly won a penalty call in the 18th minute after Kramaric went down on a foul from Carrasco. However, VAR dismissed the penalty after it became clear that Croatia was off-side in an earlier play. Needing a win to be sure of advancing, Belgium produced its best performance of the World Cup and wasted two clear chances that fell to Romelu Lukaku. The halftime substitute struck a shot against the post and failed to control a ball that bounced off his chest. Belgium goalkeeper Thibaut Courtois made a couple of great saves to deny Croatia from opening the scoring.

Elsewhere, Morocco qualified for the round of 16 after scoring twice in the first half of their final Group F match against Canada. Hakim Ziyech scored the opener to put Morocco in the lead against Canada in the 4th minute, followed by Youssef En-Nesyri beating Milan Borjan with a fine strike at his near post in the 23rd minute. However, Nayef Aguerd scored an own goal in the 40th minute and gifted a comeback opportunity for Canada.

Perisic nearly opened the scoring in the opening minutes of the first half after attempting a shot away from the edge of the box, which flew just wide of Courtois’ goal. Belgium managed to counter-press Croatia and created two clear-cut chances. Dries Mertens missed a golden opportunity in the 15th minute to find the opener after De Bruyne sent a perfect through ball to Mertens in space. However, his shot went well high and wide of Livaković’s goal. Josip Juranovic right footed shot from the right side of the box misses to the right.

Belgium's lack of sharpness up front was pretty obvious from the start despite numerous chances created from the mid-field. On the other end, Modric created several chances from the left flank but failed to find the opener.

Belgium started the second half with an eye on the goal and beat Croatia. Romelu Lukaku's header in the 47th minute was comfortably caught by Dominik Livaković. On the other end, Croatia nearly opened the scoring in the 50th minute through Kovacic after he fired a wild drive from the edge of the box. However, Real Madrid goalkeeper Thibaut Courtois brilliantly pawed over the bar to deny Croatia. Minutes later, Courtois makes two more crucial saves to push away a low shot from Brozovic from 20 yards and a left-footed shot from Modric. Meanwhile, Belgium wasted a clear opportunity to take the lead through Lukaku in the 62nd minute. However, Lukaku's strike from inside the box hits the woodwork. On the other end, Belgium keeper Courtois managed to deny Modric's flicked shot from inside the area.