In the first half of the game, both teams failed to score and went ahead without a goal in the second half. Mbappe netted the first of his two goals-like efforts when converting a cross from Theo Hernandez in 61 minutes. 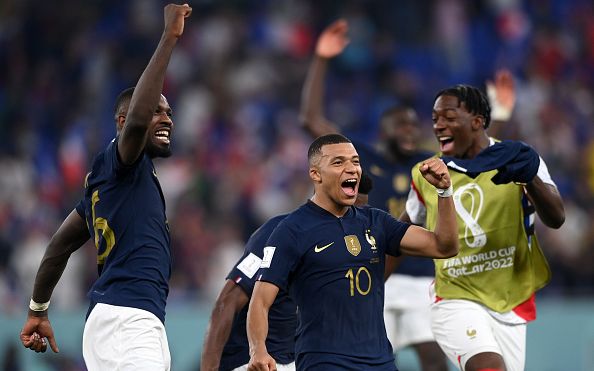 Doha: France on Saturday became the first team to qualify for the Round of 16 of the ongoing FIFA World Cup 2022 as Kylian Mbappe's brace fired them to a 2-1 victory against Denmark in Group D here at Stadium 974.

Both France and Denmark failed to get a breakthrough as the first half remained goalless in the Group D match.

In the first half of the game, both teams failed to score and went ahead without a goal in the second half. Mbappe netted the first of his two goals-like efforts when converting a cross from Theo Hernandez in 61 minutes.

Despite falling behind, Denmark didn't panic, and seven minutes later, Andreas Christensen headed in a corner from Christian Eriksen as the French stumbled defensively, bringing the score equal.

Both teams had late-game opportunities to win it, but Mbappe produced the game-winning moment, once more displaying his razor-sharp predatory abilities to head in an Antoine Griezmann cross with four minutes left.

France are all-but assured to finish as Group D winner, closing no six-goal swing with Australia in the final set of fixtures.

Denmark have to defeat second-placed Australia in their final group match on Wednesday to go through but would also need Tunisia not to win against France.

Talking about the first half of the match, the defending champions started aggressively as Jesper Lindstrom won a free kick on the left wing in the third win of the match. Three minutes later Kylian Mbappe's assist helped Adrien Rabiot take a header which was blocked.

In the 13th minute, Antoine Griezmann's cross gave Raphael Varane an opportunity but his header went from the centre of the box and missed goal post.

Mbappe and Olivier Giroud consistently kept on assisting but France's attempts were either saved or blocked. Both France and Denmark went into half-time without any goal on the board.

Denmark enjoyed a little more possession than France as they had a possession of 51 per cent while the defending champions had only 49. The French team had three shots on target while Denmark had none.