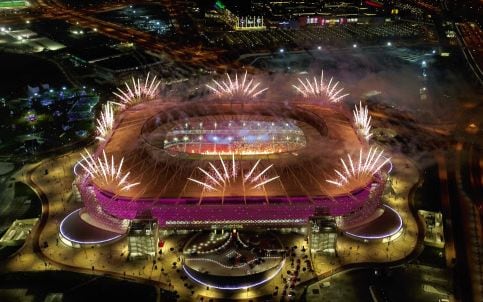 Sydney: Australia's national men's football team on Thursday condemned human rights abuses in Qatar ahead of the World Cup, becoming the first participating side to collectively criticise the host country.

Football Australia said the reported exploitation of migrant workers during stadium construction "cannot be ignored", and urged Qatar to legalise same-sex marriage in one of the most significant tournament protests to date.

The upcoming World Cup -- beginning on November 20 -- has been marred by controversy since Qatar was awarded the rights 12 years ago.

"We acknowledge the significant progress and legislative reforms have occurred in Qatar over recent years to recognise and protect the rights of workers, and we encourage all stakeholders to continue this path to reform," Football Australia said in a statement.

"However, we have also learned that the tournament has been associated with suffering for some migrant workers and their families and this cannot be ignored."

The statement from Football Australia was accompanied by a short video featuring 16 players from the Socceroos.

Before making the statement, the players spoke to labour organisations and advocacy groups such as Amnesty International.

"Over the last two years, we have been on a journey to understand and know more about the situation in Qatar," the players said in the video.

"We have learned that the decision to host the World Cup in Qatar has resulted in the suffering and harm of countless of our fellow workers.

"These migrants that have suffered are not just numbers."

The players acknowledged reforms to improve working conditions but said these changes had been "inconsistent".

Football Australia also urged the oil-rich country to take a softer stance towards same-sex relationships, which are illegal.

Captains from a number of leading European countries, including England, France and Germany, will wear armbands in rainbow colours with the message "One Love" in an anti-discrimination campaign during the tournament.

A huge influx of migrant workers has underpinned Qatar's dash to prepare the infrastructure needed for one of the world's biggest sporting events.

According to Amnesty International, migrant workers from countries such as Bangladesh, Nepal and India have been paid meagre wages while toiling on these projects.

Qatar has stridently disputed the extent of worker exploitation.

Qatar's ruler earlier this week hit out at "double standards" unleashed in what he described was an "unprecedented campaign" of criticism over his country's rights record.

"Since we won the honour of hosting the World Cup, Qatar has been subjected to an unprecedented campaign that no host country has faced," Sheikh Tamim bin Hamad Al-Thani told Qatar's legislative council.

Qatar initially accepted negative commentary "in good faith" and "even considered that some criticism was positive and useful, helping us to develop aspects that need to be developed," he said.

"But it soon became clear to us that the campaign continues, expands and includes fabrications and double standards, until it reached an amount of ferocity that made many wonder, unfortunately, about the real reasons and motives behind this campaign," he said.