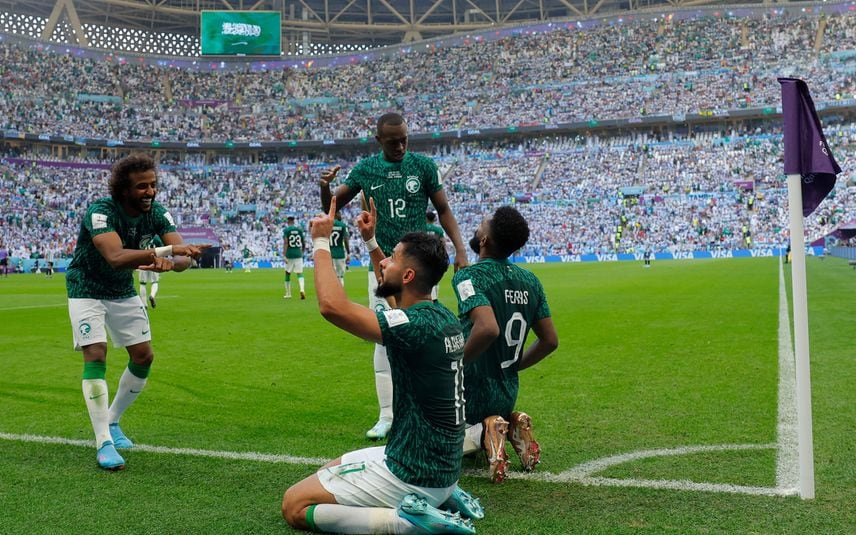 Doha: In one of the major upsets in World Cup history, Saudi Arabia came back from one goal down to beat Argentina 2-1 in their FIFA World Cup opener at Lusail Stadium in Doha on Tuesday. Earlier, Lionel Messi scores a penalty in the first half to give Argentina the lead.

Saudi Arabia pulled out of the miracles to deny Argentina a crucial win in their opener in Qatar World Cup. Excellent defensive work and heroics of goalkeeper Al-Owais stopped Messi and his men from taking all three points.

Argentina started their World Cup opener against Saudi Arabia in style after Messi registered a wonderful shot on target less than three minutes into the game. Minutes later, Argentina found the first goal through Messi in the 9th minute after a Saudi player brought down Paredes inside the penalty box. Goals from Lisandro Martinez and Lionel Messi were also ruled out as off-side in the first half.

However, Saudi came back strong in the second half to equalise against Argentina through Saleh Al-Shehri in the 48th minute.
Al-Shehr received a long ball from the middle, dribbled past defender Romero and scored past the goalkeeper. Saudi scored their second through Salem Al-Dawsari in the 53rd minute. Dawsari, who finds himself clear inside the box with the ball, take a step to his right and fires a right-footer shot to the top left corner.

Argentina tried to come back strong but failed to open up Saudi's resolute defence. Tagliafico missed a golden opportunity in the 63rd minute for an equaliser, after goalkeeper Al-Owais denied him after Lisandro Martinez had guided the ball back cross. Messi also missed a free kick from outside the box,

Meanwhile, Saudi, playing with a high line, tried to push Argentina's front line into making drastic runs through the defensive cover. Saudi failed to register even a single shot at the Argentine goal in the first half.

Argentina had the upper hand in the first half, with the forward making runs through the wings. The opener came in the 9th minute after a Saudi player brought down Paredes inside the penalty box. The referee -- after checking VAR -- awarded a penalty for Argentina, and Messi stroked the ball home, sending the keeper diving the wrong way. With the goal, Messi became the fifth player to score at four World Cup tournaments (2006, 2014, 2018, 2022) after Pelé, Uwe Seeler, Miroslav Klose and Cristiano Ronaldo.

Saudi tried to put pressure by making runs through the right wing, often finding forwards with long balls. However, its solid defensive line of Argentina has somehow managed to keep the Saudi side quiet.

Meanwhile, Messi almost scored his second goal after racing through and slotting home the ball one-on-one past keeper, only to be ruled out as off-side.

Argentina created a series of chances, only to go agonisingly wide. Saudi on the other hand, welcomed Argentina's attack and caught Messi and Martinez six times within 30 minutes of the game.