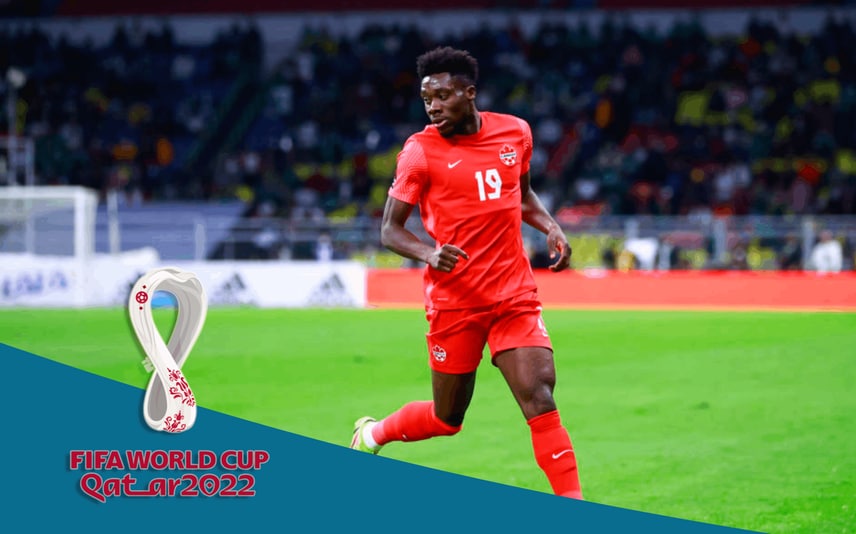 Canada have forged a close-knit men's squad based on hard work, discipline and a clear tactical framework. Yet Alphonso Davies is one of the few players capable of providing an X-factor for the Canadians. Comfortable playing as a full-back or winger, Davies offers blinding speed on the counter-attack as well as a proven ability on the biggest stages.

When Davies runs out onto the turf of the Al Rayyan Stadium to face a star-studded Belgium on November 23 it will mark the latest step of a remarkable journey that has taken him from a refugee camp to the World Cup.

The fleet-footed Canada and Bayern Munich winger has crammed so much into his record-breaking career that it is easy to forget he is still only 22.

At an age when many professionals are still feeling their way into the upper echelons of the sport, Davies is already a seasoned veteran.

Four Bundesliga titles, a Champions League winners' medal and a FIFA Club World Cup crown are just some of the honours Davies has gathered in a professional career that began as a 15-year-old in Major League Soccer.

It's all a far cry from how the buccaneering wing-back started life.

Davies was born at the turn of the century in a refugee camp in Ghana, where he spent the first four years of his life after his parents fled civil war in Liberia.

To escape the squalor, his parents migrated to Canada, first to Windsor, Ontario, then to Edmonton, Alberta.

In the country where ice hockey is king, Davies started to show huge potential with a football in after-school games at primary school and his talent was quickly spotted.

It was clear to anyone who saw hosts Canada play at the Women's World Cup in 2015 that there was something different about their coach John Herdman.

Constantly dressed in a tight, white shirt and exuding relentless enthusiasm on the touchline, Herdman was nothing like most of the men who take charge of women's teams.

Those tracksuited figures, prefer to keep signs of their leadership in the locker room and it wasn't quite the done thing for a man to draw so much attention in the women's game.

But Herdman was clearly secure enough in his connection with his team that he did not fear any eventual barbs or negative press that might come his way.

It would have been no surprise if the Englishman, who grew up in the gritty former steel town of Consett in County Durham and made his name as coach of New Zealand's women's team, had taken advantage of his new profile to move on to a 'bigger job' in the women's game.

Indeed he was offered the chance to return to his homeland and take over the national side, the Lionesses, and had he wished he could surely have gained a position at one of the big club sides investing increasing numbers into women's football.

Instead though, when he did leave the team in 2018, having won two Olympic bronze medals, it was to make the highly unusual move to take over Canada's men's team.

It was a switch which left his former captain Christine Sinclair "speechless" and which raised numerous eyebrows throughout the game but when Canada Soccer general secretary Peter Montopoli highlighted Herdman's "work ethic, his passion, his preparation and his attention to detail" as the main factors behind the decision, few could argue.

No coach had ever led a women's team and then a men's team to World Cups but Herdman, typically, wasted little time in declaring qualification for Qatar as his goal, despite Canada's long record of underachievement in CONCACAF qualifying.

The last time Canada made it to a World Cup finals tournament was in 1986 but Herdman's target was not based purely on his own positive thinking - a new generation of players was emerging that offered some real hope.

The United States, Mexico and Costa Rica had been the main forces in CONCACAF qualifying in the years since Canada's solitary appearance at a finals with Honduras, Jamaica, Trinidad and Panama also making it to finals in that period.

But under Herdman, Canada finished above them all, with a 2-0 home win over the United States and 2-1 victory over Mexico the statement victories which signaled his team were now the top dogs in the region.

First among those men is left winger or wing-back Alphonso Davies, whose success at club level with Bayern Munich was replicated in the national team jersey but also proved to be an inspiration for other players in the team.

Striker Jonathan David made an impact in Belgium for Gent before earning a move to French club Lille and like Davies and several other key members of the squad comes from an immigrant background.

Herdman has persuaded several players with dual nationality to choose Canada as their national team but he also hopes this World Cup will convince diverse urban populations in Canada to embrace the team.

"But now we are seeing more Canadian shirts on the street. Everyone that had fallen out of love with the national team of Canada can now put down their Italian shirt, their Serbian shirts and put on the red of Canada. They're proud of us."

They will be proud of Herdman too back in Consett, a town which offered little promise to ambitious youngers in the 1980s but which also produced coach Bev Priestland who took Canada's women's team to Olympic gold in Tokyo last year.

But for all the ambition, the goals and the positivity from Herdman, he knows that in Croatia, Belgium and Morocco, his team face very tough odds to progress out of Group F in Qatar.

"The cold, hard truth is that CONCACAF is a different jungle to the world stage and over these last four years we haven't really prepared for that step up. So we know there is going to be a lot of learning on this journey," he said.

But Herdman wouldn't be the man he is if he didn't think there was still an opportunity for an upset, hoping that pre-tournament training and a friendly against Japan will help his team be in a place to maybe produce a surprise.

"We'll gather information in that match to help us... impose an identity that we can be proud of and give us a chance."