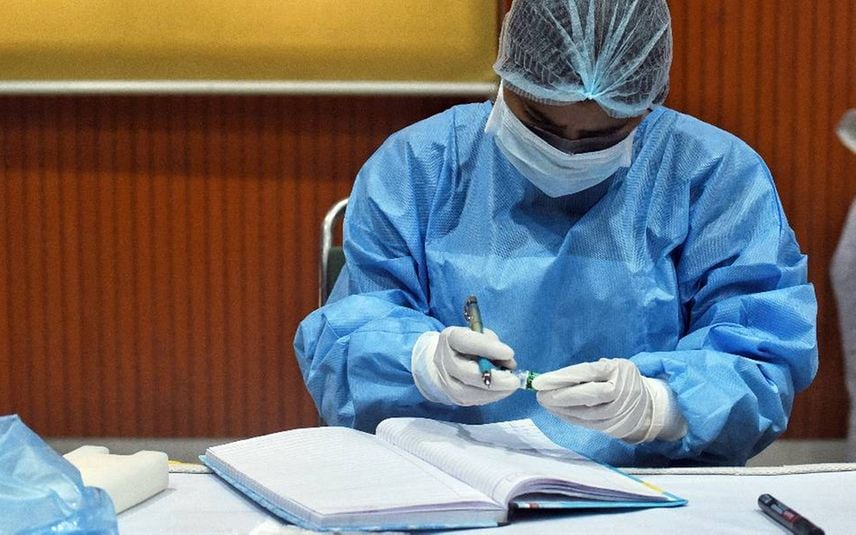 United Nations/Geneva: The World Health Organization (WHO) is monitoring the new coronavirus variant B.1.1.529 first detected in South Africa and will hold a "special meeting" on Friday to discuss if the heavily mutated strain will become a variant of interest or a variant of concern, a top official said.

The latest variant is the most heavily mutated version discovered so far. First identified in South Africa at the start of this week, the strain has already spread to neighbouring countries, including Botswana, where it has been reportedly detected in fully vaccinated people.

The new variant has been red-flagged by scientists over an alarmingly high number of spike mutations that might make the virus more resistant to vaccines, increase its transmissibility and lead to more severe COVID-19 symptoms.

"There are fewer than 100 whole genome sequences that are available. We don't know very much about this yet. What we do know is that this variant has a large number of mutations. And the concern is that when you have so many mutations, that can have an impact on how the virus behaves,” Infectious Disease Epidemiologist and COVID-19 Technical Lead at the WHO Maria Van Kerkhove said during a virtual Q&A session on Thursday.

She said right now the researchers were getting together to understand where these mutations and spike protein are and what that potentially may mean for COVID19 diagnostics, therapeutics and vaccines.

Kerkhove said WHO colleagues in South Africa are planning to undertake a neutralisation study that will take a few weeks “for us to understand what impact this variant has on any potential vaccines.”

Emphasising that a great deal of work is underway on the new variant, Kerkhove said the WHO Technical Advisory Group on Virus Evolution is discussing this with colleagues in South Africa. “We're also meeting again tomorrow. We're calling a special meeting to discuss this, not to cause alarm, but just because we have this system in place, we could bring these scientists together and discuss what does it mean and also can set the timeline for how long it will take for us to get those answers,” she said.

“So right now, it's a variant that is under monitoring. The TAG Virus Evolution working group will discuss if it will become a variant of interest or a variant of concern. And if that's the case, then we will assign it a Greek name. But it is something to watch,” she said.

It is “good” that these types of variants are being detected because that means there is a system in place that is working, Kerkhove noted.

The WHO has said that only 27 per cent of health workers in Africa have been fully vaccinated against COVID-19, leaving the bulk of the workforce on the frontlines against the pandemic unprotected.

After almost four months of a sustained decline, COVID-19 cases in the general population in Africa have plateaued. For the first time since the third wave peak in August, cases in Southern Africa have increased, jumping 48 per cent in the week ending on November 21 compared with the previous week.

“With a new surge in cases looming over Africa following the end-of-year festive season, countries must urgently speed up the rollout of vaccines to health care workers,” said Dr Matshidiso Moeti, WHO Regional Director for Africa.

According to the WHO, vaccine shipments have been on the rise over the past three months. Africa has received 330 million doses from the COVAX Facility, the African Vaccine Acquisition Task Team and bilateral agreements since February 2021.

Of these 83 per cent have been delivered since August alone. As vaccine supply picks up, addressing uptake bottlenecks and accelerating rollout become more critical.

Kerkhove said that the more the COVID-19 virus circulates, the more opportunities the virus has to change, the more mutations there will be.

“So, we need to drive that transmission down so that we reduce the possibility of having more variants emerge. But this is one to watch. I would say we have a concern but I think you would want us to have a concern,” she said.

She noted that the WHO was tracking at least 30 sub-lineages of the highly transmissible Delta variant, which is also evolving.

Against the backdrop of the new variant being detected in South Africa, Dr Mike Ryan, Executive Director of the WHO Emergencies Programme, cautioned that there should be no knee-jerk responses especially with relation to South Africa, which is picking up interesting and important signals for “which we're doing the proper risk assessment and risk management.

He said that in the past when there has been any mention of any kind of variation of the virus, everyone was “closing borders and restricting travel”.

“It's really important that we remain open, and we will remain focused on understanding and characterizing the problem and not punishing countries for doing outstanding scientific work and actually being open and transparent about what they're seeing and what they're finding,” Ryan said.

The WHO official said it was really important that countries like the UK and South Africa, who are openly sharing and being transparent about variants, are supported.

“If we're going to beat this virus, we need good information. And good information will only come when people feel that they may share that information without being punished for having done so. We have not fully assessed any threat or risk associated with this variation. That remains to be seen and the studies need to be done,” he said.

Cautioning people that viruses evolve and there are variations, Ryan, however, added that “it's not the end of the world and the sky is not falling in.”

Boris Johnson quits as Conservative leader, to stay as UK PM till replacement ...