Richard Branson safely back to earth after touching edge of space 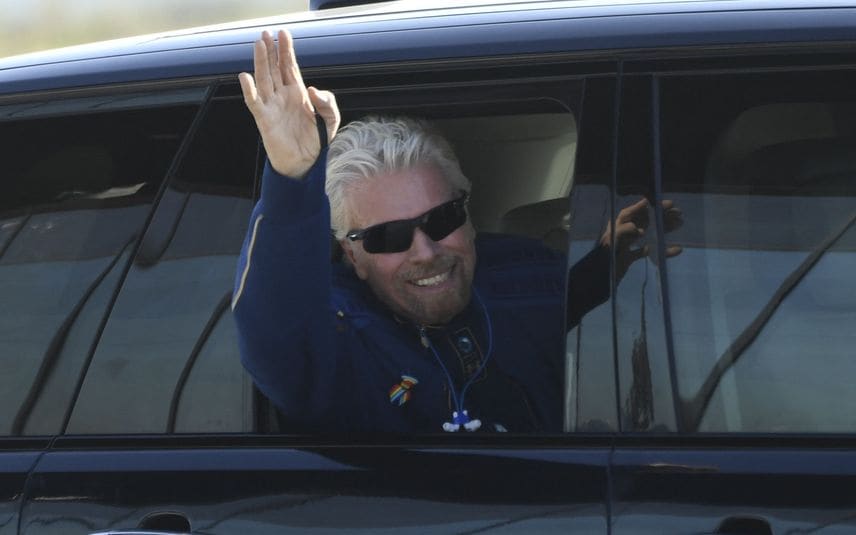 British billionaire Richard Branson is welcomed as he arrives at Spaceport America near Truth or Consequences, New Mexico.

San Francisco:Ushering in a new space age, Virgin Galactic's billionaire CEO Richard Branson on Sunday touched the edge of space with three employees, including one of Indian-origin, and has landed safely back to Earth.

"Congratulations to all those who created such a beautiful space," he said from space.

Branson flew aboard his Virgin Galactic's VSS Unity spaceplane, along with three company employees to the edge of space on Sunday a little after 10.30 a.m. ET (8 p.m. India time).

Moses was to serve as cabin lead and test director in space, overseeing the safe and efficient execution of the test flight objectives, while Bennett was to evaluate cabin equipment, procedures, and experience during both the boost phase and in the weightless environment.

Bandla was to evaluate the human-tended research experience, using an experiment from the University of Florida that requires several handheld fixation tubes that were to be activated at various points in the flight profile, and Branson was to evaluate the private astronaut experience, undergoing the same training, preparation and flight as Virgin Galactic's future astronauts.

About 40 minutes after takeoff, Unity dropped from the middle of the mothership and ignited its rocket engine moments later to send Branson and the crew to the edge of space, about 89 kms high, for a few minutes of weightlessness.

The flight was earlier scheduled for 6.30 pm (India time), but was delayed due to bad overnight weather in the launch area, the company said in a tweet.

"Overnight weather delayed the start of flight preparations, but we are on track to fly today with a newly scheduled time.

The mission, called Unity 22, was Virgin Galactic's fourth flight to space carrying humans, with its largest crew yet.

Musk had a day earlier tweeted: "Will see you there to wish you the best."

Branson said that as a child he dreamt of space, and 17 years after he founded his own space company Virgin Galactic in 2004, the 70-year-old was flying to space.

Branson said he will "announce something very exciting" after his spaceflight, reports The Verge.

Virgin Galactic aims to fly two more flights, then the start of regular commercial operations from early 2022. The ultimate goal is to conduct 400 flights per year.

The company has already sold nearly 600 tickets, with each ticket costing nearly $250,000.

After Branson, Amazon Founder Jeff Bezos is expected to take off in his own space tourism Blue Origin rocket on July 20. Bezos will fly with his brother Mark and two others.

The Karman line, 100 kms above the ground, is the boundary of space.

Blue Origin's New Shepard rocket aims to launch its crew capsule just beyond the Karman line for a few minutes of weightlessness, while Virgin Galactic's SpaceShipTwo space plane flew 89 kms high -- just over the boundary of space defined by the US government.