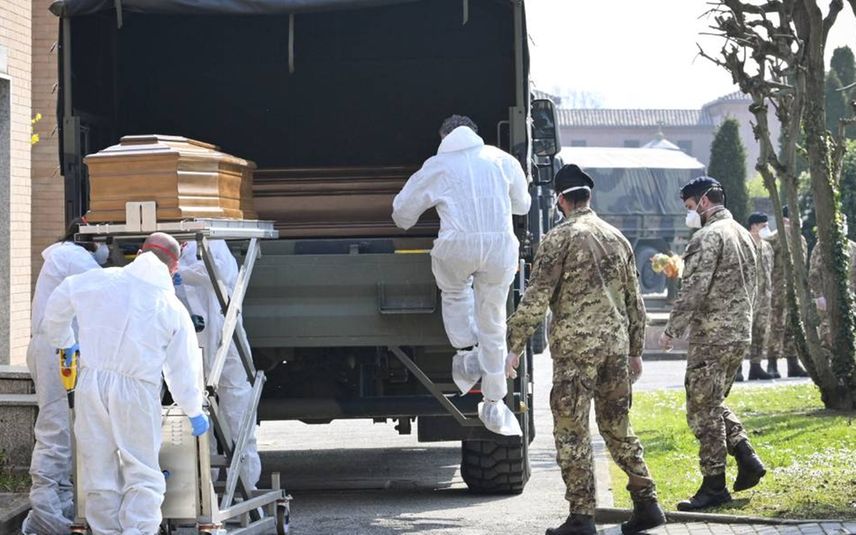 Rome: The cumulative number of coronavirus cases in Italy reached 86,498 on Friday, exceeding the total figure registered in China, according to data by the Civil Protection Department coordinating the national emergency response.

The death toll grew to 9,134, with 50 fatalities occurred on Thursday and not yet included in the total figure, national commissioner for the emergency Domenico Arcuri explained at a daily press conference.

In unveiling the new statistics, Arcuri took the place of extraordinary commissioner and Civil Protection Department Chief Angelo Borrelli, who was under home confinement for the second day in a row due to fever (but negative for coronavirus).

According to the data, 589 new cured people were registered on a daily basis, bringing total recoveries to 10,950.

With 4,401 people tested positive on Friday, the number of active coronavirus infections grew to 66,414. "About 6 percent of the total, or 3,732 patients, are currently in intensive care," Arcuri explained.

According to epidemiological data released by the National Health Institute (ISS) on Friday (and based on data up to Thursday), at least 6,414 health professionals were among those positive for the coronavirus so far.

"They have an average age of 49 years, and some 35 percent of them are male," the ISS wrote in a bulletin.

At the press conference, the commissioner stressed statistics in Italy and in many other places around the world "prove how global and wide this health crisis is."

"In a global crisis, there is a clear need of cooperation, without egoism, and Italy is playing its due part," he stressed.

Arcuri also recalled Italian authorities were putting much effort in trying to find and purchase equipment and protective gear necessary in the emergency from as many countries as possible.

"We keep cooperating with many countries, and keep buying (equipment) from France, Germany, China, and Russia... while talks are under way with further countries, which are often located very far from us," he said.

"This is the time of cooperation and solidarity, with no further implication, whether of political or geographical nature. Wherever there is a chance to obtain solutions to our citizens' problems... that is the right place to go," he stressed.

Arcuri said all Italian productive and social actors have been called to give their contribution to strengthen industrial production and help the country become more self-sufficient in terms of medical equipment in these exceptional circumstances.

In related news on Friday, the country's Education Minister announced schools would most likely remain shut beyond the national lockdown period so far imposed by the government, which was officially effective until April 3.

"For sure, the school closure will be extended over the April 3 date," Lucia Azzolina told state TV broadcast RAI 1.

"At the moment, our goal is to ensure students will return to school only after health authorities have guaranteed this is safest... our pupils' and our educational staff's health is the priority."

The minister explained that "information about final exams, both in primary and secondary schools, will be provided to students in the next weeks."

Meanwhile, Prime Minister Giuseppe Conte's cabinet was at work to outline further measures to help the country's industrial and social fabric sustain the impact of the health crisis. A first package worth 25 billion euros (27.7 billion U.S. dollars) was passed earlier this month.

Addressing the senate on Thursday, Conte said he was confident the government would be able "to offer companies, families, and workers additional allocations, for a total not lower than 50 billion euros (including the first package)."IANS