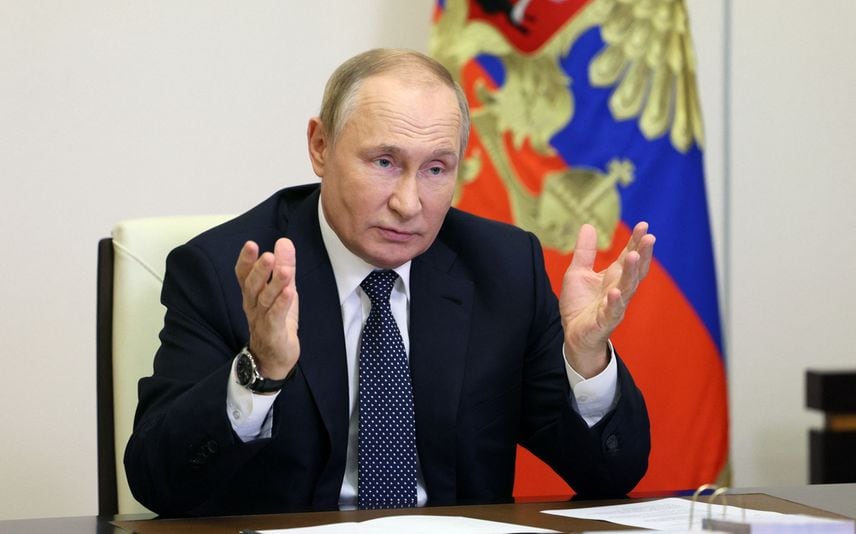 Kyiv: Kyiv on Wednesday claimed further victories over Russian troops in eastern Ukraine as the Kremlin vowed to recapture territory lost in a lightening Ukrainian counteroffensive.

In recent weeks, Ukraine's forces, bolstered by Western weapons, have wrested Russian troops out of a string of towns and villages in the east and in the south.

Kyiv this week claimed gains in the southern Kherson region and control of almost the entire eastern Kharkiv region, paving the way for its forces to enter the separatist stronghold of Lugansk.

"The de-occupation of the Lugansk region has already officially started," regional governor Sergiy Gaiday said in a video posted on social media, dressed in camouflage and adding that several settlements had been liberated.

On Wednesday, Russian President Vladimir Putin signed into legislation his annexation of four Ukrainian territories -- including Lugansk -- as the EU agreed a new round of sanctions against Moscow in response.

Kremlin spokesman Dmitry Peskov said Moscow would take back land it lost to Kyiv within the annexed regions, vowing they would be "Russian forever and will not be returned."

Putin last Friday signed agreements with the Moscow-installed leaders of the four regions to become subjects of the Russian Federation, despite condemnation from Kyiv and the West.

The four territories -- Donetsk, Kherson, Lugansk and Zaporizhzhia -- create a crucial land corridor between Russia and the Crimean Peninsula, which was annexed by Moscow in 2014.

Together, the five regions make up around 20 percent of Ukraine.

The Kremlin annexed the territories after hastily conducting referendums, denounced as void by Kyiv and its Western allies, but has yet to confirm what areas exactly of those regions are being annexed.

Russian forces do not have full control over Kherson or Zaporizhzhia and recently lost control of several settlements in Donetsk.

"The way we are regrouping (our forces) along the front means that we can gather strength and strike back," Kirill Stremousov, the Moscow-appointed deputy head of Kherson region, told the RIA Novosti news agency.

On Tuesday, Ukrainian President Volodymyr Zelensky said his forces were making "rapid and powerful" gains and had retaken "dozens" of villages in the east and south.

The latest battlefield maps from Moscow showed that Russian troops had left many areas in Kherson, including along the west bank of the Dnipro River.

In Kharkiv, the maps indicated that Russian forces had almost entirely abandoned the east bank of the Oskil River, potentially giving the Ukrainians space to shell key Russian troop transportation and supply corridors.

While Russian authorities remain largely silent about the extent of the setbacks, war correspondents of pro-Kremlin media admitted that troops were in trouble.

"There won't be any good news in the near future. Not from the Kherson front nor from Lugansk," newspaper journalist Alexander Kots wrote on his Telegram channel with over 640,000 followers.

Near Lyman, a strategic transport hub in Donetsk that Kyiv recaptured over the weekend, a Ukrainian paratrooper told AFP that forces were "exhausted".

"We'll rest for a bit and then we will go further," said the young, bearded soldier. "We will chase them," he added.

On Tuesday, US President Joe Biden told Zelensky that another $625 million in military assistance was on the way.

From the EU, there were no details about the nature of fresh sanctions agreed against Russia.

The latest package -- the eighth since Russia's invasion in February -- is now going through a final approval procedure which, if no objections emerge, will be published and come into effect on Thursday, the Czech Republic's EU ambassador said on Twitter.

Otherwise, Russia insisted that it should be part of an international probe into leaks in the Nord Stream pipeline that carries gas from Russia to Europe. Sweden has blocked off the area pending an investigation.

Moscow has accused the West of being behind blasts that lead to four leaks on the Baltic Sea pipelines.

Both Moscow and Washington have denied involvement.