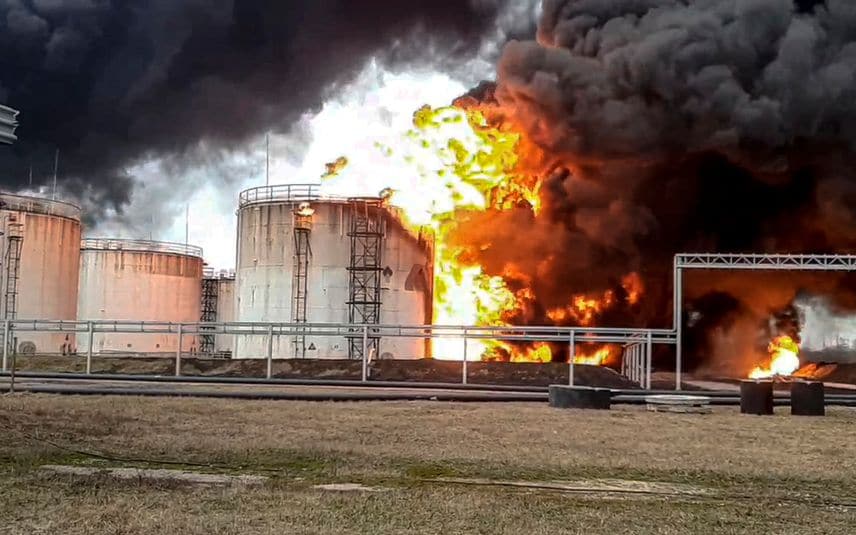 A view of the site of fire at an oil depot in Belgorod region, Russia. Photo:AP

Kyiv: Talks to stop the fighting in Ukraine resumed Friday, as another attempt to rescue civilians from the shattered and encircled city of Mariupol was thrown into jeopardy and Russia accused the Ukrainians of a cross-border helicopter attack on an oil depot.

The governor of Russia's Belgorod region, Vyacheslav Gladkov, said an airstrike on Russian soil by a pair of helicopter gunships caused fires and wounded two people. Several nearby businesses were also reported hit.

“Certainly, this is not something that can be perceived as creating comfortable conditions for the continuation of the talks,” Kremlin spokesman Dmitry Peskov said, five weeks into the war that has left thousands dead and driven more than 4 million refugees from Ukraine.

It was not immediately possible to verify the Russian accusation. Ukrainian Foreign Minister Dmytro Kuleba said he could “neither confirm nor reject the claim that Ukraine was involved in this, simply because I do not possess all the military information.”

Russia has reported cross-border shelling from Ukraine before, including an incident last week that killed a military chaplain, but not an incursion of its airspace. The depot, run by Russian energy giant Rosneft, is about 35 kilometers (21 miles) from the Ukraine border.

Meanwhile, Russian troops appeared to be in rapid retreat from areas around Kyiv, three days after Moscow said it planned to reduce military activity around the Ukrainian capital and the northern city of Chernihiv to create more trust between the two sides and promote negotiations.

But Ukraine and its allies have warned that the Kremlin is not de-escalating but regrouping, resupplying its troops and redeploying them to the country's east for an intensified assault on the predominantly Russian-speaking Donbas region, which includes Mariupol.

The latest negotiations, taking place by video, follow a meeting Tuesday in Turkey, where Ukraine reiterated its willingness to abandon a bid to join NATO and declare itself neutral. In return, it proposed that its security be guaranteed by several other countries.

The head of the Russian delegation, Vladimir Medinsky, wrote on social media that Moscow's positions on retaining control of the Crimean Peninsula — seized from Ukraine in 2014 — and expanding the territory in eastern Ukraine held by Russia-backed separatists “are unchanged.”

The International Committee for the Red Cross struggled to work out an operation to send emergency aid into Mariupol and bring civilians out by bus.

The strategic southern port city on the Sea of Azov has seen some of the worst suffering of the war, with weeks of heavy fighting and shortages of water, food and medicine. Around 100,000 people are believed to be in the city, down from a prewar 430,000.

“We are running out of adjectives to describe the horrors that residents in Mariupol have suffered,” Red Cross spokesperson Ewan Watson said. “The situation is horrendous and deteriorating, and it's now a humanitarian imperative that people be allowed to leave and aid supplies be allowed in.”

City authorities said the Russians were blocking access to Mariupol and it was too dangerous for people to leave on their own. Those who have fled have mostly done so via private cars, but drivable vehicles and fuel are in short supply.

“We do not see a real desire on the part of the Russians and their satellites to provide an opportunity for Mariupol residents to evacuate to territory controlled by Ukraine,” Petro Andryushchenko, an adviser to the mayor of Mariupol, wrote on the Telegram messaging app.

He said Russian forces “are categorically not allowing any humanitarian cargo, even in small amounts, into the city.”

On Thursday, Russian forces blocked a 45-bus convoy attempting to evacuate people from Mariupol, and only 631 people were able to leave in private cars, the Ukrainian government said. Russian forces also seized 14 tons of food and medical supplies trying to make it to Mariupol, Deputy Prime Minister Iryna Vereshchuk said.

In the past few days, the Kremlin, in a seeming shift in its war aims, said its “main goal” now is gaining complete control of the Donbas. Mariupol's capture would be a major prize for the Russians, giving them an unbroken land bridge to Crimea.

The Donbas is the industrial region of eastern Ukraine where Moscow-backed separatists have been battling Ukrainian forces since 2014. The separatists have declared two areas as independent republics.

Despite its pledge to scale back, Russian forces have subjected both Chernihiv and Kyiv to continued air- and ground-launched missile strikes. But Ukraine's military said it has retaken control of 29 settlements in the the two regions, where Russia has pulled back some of its troops.

The Russian military in the northeast also continues to shell Kharkiv, and in the southeast is trying to seize the cities of Popasna and Rubizhne as well as Mariupol, the Ukrainian military said.

The International Atomic Energy Agency said it could not independently confirm the exposure claim. Energoatom gave no details on the condition of the soldiers and did not say how many were affected. There was no immediate comment from the Kremlin.