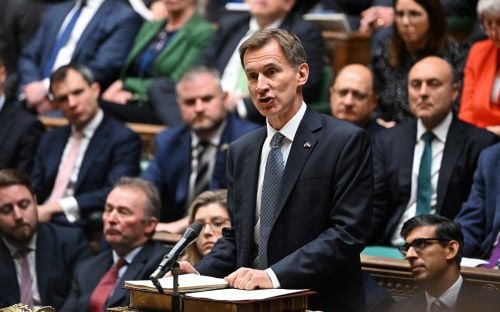 A handout photograph released by the UK Parliament shows Britain's Chancellor of the Exchequer Jeremy Hunt making an autumn budget statement in the House of Commons in London on November 17, 2022 | Photo: AFP

London: Britain's government Thursday unveiled a painful budget with £55 billion ($65 billion) of tax hikes and spending cuts despite confirming the country was in recession.

Finance minister Jeremy Hunt said the measures were needed to bring financial stability and shore up public finances after recent markets turmoil, insisting they would alleviate rather than aggravate the downturn.

Market were not entirely convinced, however, with sterling trading down more than one percent against the dollar.

Britain's Office for Budget Responsibility (OBR) judged "that the UK, like other countries, is now in recession", Chancellor of the Exchequer Hunt told parliament Thursday.

Despite the downturn, Hunt and Prime Minister Rishi Sunak insist tough action is needed after Truss unleashed a package of unfunded tax cuts that caused panic on financial markets.

The pound had hit a record-low close to parity against the dollar in late September after Truss failed to reveal the impact of her tax cuts on growth and inflation.

Her budget also triggered temporary purchases of UK government bonds by the Bank of England (BoE) to stabilise the market.

Hunt said the UK economy was set to shrink 1.4 percent next year.

The BoE, which is raising interest rates to combat sky-high inflation, has warned the UK economy may experience a record-long recession until mid-2024.

Despite this, Hunt confirmed tax rises for workers alongside spending cutbacks.

He pledged, however, to increased outlay on the cherished National Health Service amid a severe backlog in patient operations.

The chancellor added that benefits for the unemployed and pensioners would increase close to the inflation rate, and the minimum wage would climb.

At the same time, the government prolonged a freeze on its international aid budget introduced during the coronavirus pandemic in a move condemned by charities.

Hunt also ramped up a windfall tax on oil and gas giants, whose profits have surged on fallout from the Ukraine war, to help fund support for consumers hit by rocketing energy bills.

Energy giants such as BP and Shell will face an exceptional tax on profits of 35 percent, up from 25 percent, lasting an additional three years to 2028.

The government will also impose a new temporary levy on electricity generation companies.

The conflict in Ukraine has helped push worldwide inflation to its highest levels in decades. Prices are also up on supply constraints fuelled by Covid.

Britain's economy is additionally being impacted by Brexit, the OBR said a day after similar comments by BoE governor Andrew Bailey.

Hunt at the weekend likened himself to the penny-pinching miser Ebenezer Scrooge in Charles Dickens' festive favourite "A Christmas Carol", but argued his plan would "make sure Christmas is never cancelled".

He told MPs on Thursday: "In the face of unprecedented global headwinds, families, pensioners, businesses, teachers, nurses and many others are worried about the future.

"So today we deliver a plan to tackle the cost-of-living crisis and rebuild our economy."

It comes as UK workers across various sectors have gone on strike this year to demand pay rises to compensate for surging inflation.

State-employed nurses and firefighters could be the latest groups to carry out industrial action, joining further walkouts this winter by rail workers and postal staff.

"The Conservatives have crashed our economy, given up on growth and sent inflation through the roof.

"As usual, it is ordinary working people who are paying the price," she added.

The government added that a cap on average annual household fuel bills would rise by a fifth to £3,000.