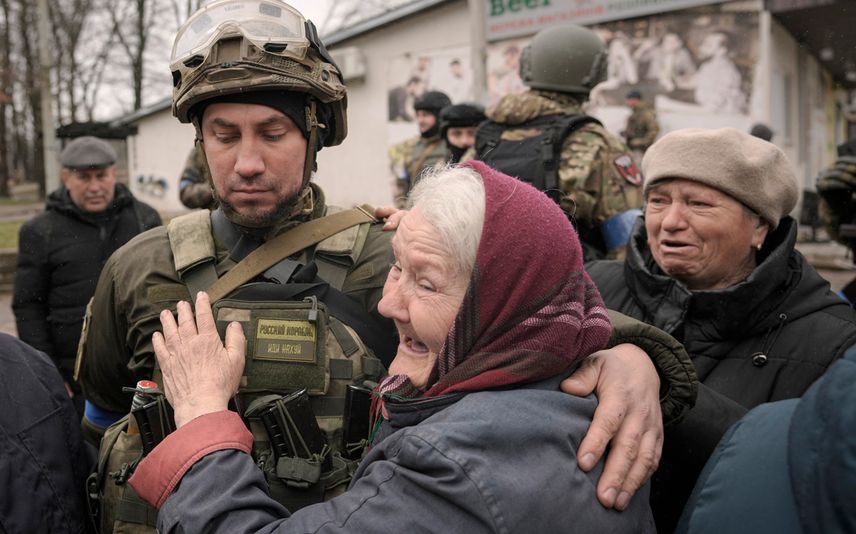 A woman hugs a Ukrainian serviceman after a convoy of military and aid vehicles arrived in the formerly Russian-occupied Kyiv suburb of Bucha, Ukraine. Photo: AP

London: As evidence mounts of "appalling acts" in the Ukrainian towns of Irpin and Bucha, Russia's attacks on civilians must be investigated as war crimes, Britain's foreign minister said Sunday.

Foreign Secretary Liz Truss said in a statement that the government is seeing "increasing evidence of appalling acts by the invading forces in towns such as Irpin and Bucha", close to Kyiv.

AFP reporters saw at least 20 bodies, all in civilian clothing, strewn across a single street in Bucha on Saturday.

Truss said that Russian troops' "indiscriminate attacks against innocent civilians during Russia's illegal and unjustified invasion of Ukraine must be investigated as war crimes".

"We will not allow Russia to cover up their involvement in these atrocities through cynical disinformation," Truss said, adding that the UK "will fully support any investigations by the International Criminal Court".

She also called for harsher sanctions, after Prime Minister Boris Johnson tweeted late Saturday that the UK would "continue to step up military, economic and diplomatic support, including further ramping up sanctions".

Truss said it was essential that the international community "continues to provide Ukraine with the humanitarian and military support it so dearly needs, and that we step up sanctions to cut off funding for Putin's war machine at source".